For the past ten years, Affinity Inc. Magazine has reported on the important accomplishments, opportunities and achievements in the LGBTQ+ business, political and organizations realms.

In federal, state and local bodies, LGBTQ officials wield the gavel, and more LGBTQ leaders of color, bisexual and transgender officials are elected than ever before.

Below is a timeline of the greatest moments for the LGBTQ community Affinity has had the pleasure of covering for you. 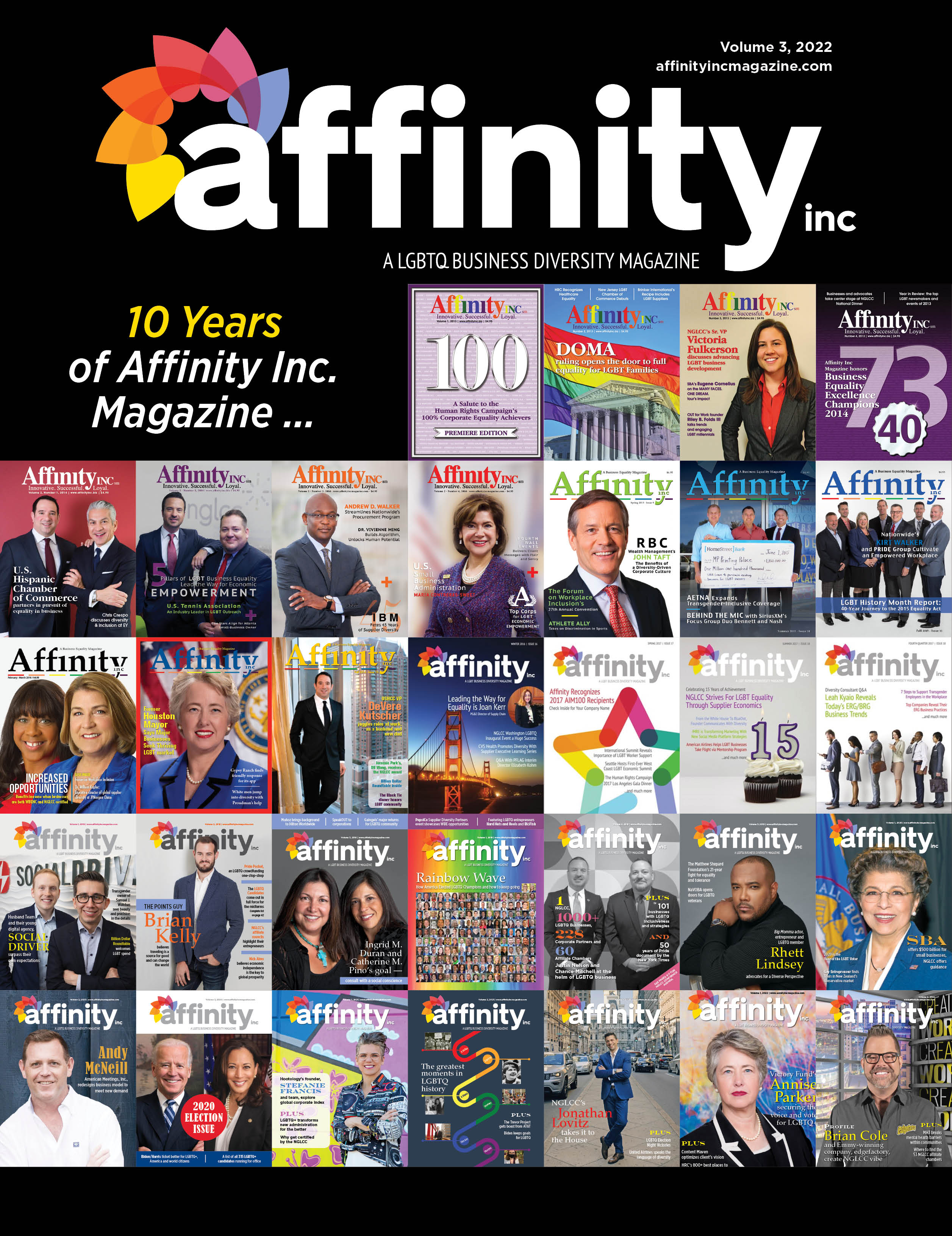 The 2012 elections saw a swell in the number of out LGBTQ state lawmakers, with seven states gaining their first or only such lawmaker that year. Florida, New Mexico, North Dakota, Pennsylvania, South Dakota, Texas and West Virginia all elected LGBTQ legislators in 2012, while other states such as Colorado, California and New York grew their LGBTQ membership. In total, Victory Fund supported 104 state legislative candidates in 2012.

In Pennsylvania, gay civil rights lawyer Brian Sims made headlines as the first out LGBTQ person elected to the General Assembly defeating a 28-year incumbent to represent the 182nd State House District. He won by 233 votes.

Winning marriage equality in Illinois required more arm-twists and plot twists than a mega-drama soap opera. Victory Fund candidate Illinois House Rep. Greg Harris first introduced a civil unions bill in 2007. Harris also first introduced the Religious Freedom and Marriage Fairness Bill on February 22 of the same year. The bill suffered a slew of failures and fierce opposition from the anti-LGBTQ Illinois Family Institute and the Catholic Conference of Illinois, with Cardinal Francis George of Chicago issuing a letter decrying the bill that was put in every parish bulletin. But Harris also had his own team of adamantly aggressive supporters including President Barack Obama, who was following the drama in his home state.

On November 5, 2013, when it finally passed, Obama tweeted: “This is huge . . . the Illinois House just passed marriage equality.” That was followed by a statement that read, in part: “Michelle and I are overjoyed for all the committed couples in Illinois whose love will now be as legal as ours—and for their friends and family who have long wanted nothing more than to see their loved ones treated fairly and equally under the law.”

Presidential appointees working in the executive branch and federal agencies can influence policymakers and steer agencies to recognize and address equality issues. Recognizing this insider power, Victory Institute’s Presidential Appointments Initiative presented more than 3,000 vetted resumes of LGBTQ leaders to the Obama transition team in late 2008. The Obama administration subsequently set a record for LGBTQ hires—with more than 300 out LGBTQ people appointed to professional full-time or advisory positions in the executive branch and federal agencies. In addition to executive branch appointments, Obama also appointed several out LGBTQ jurists to federal courts, including Darrin Gaynes, Judith Ellen Levy and Staci Michelle Yandle, who were all confirmed in 2014.

Just days before the U.S. Supreme Court’s landmark ruling that guaranteed same-sex couples the right to marry, Pete Buttigieg – the young mayor of South Bend, Indiana – penned an op-ed to his constituents in the South Bend Tribune explaining why the pending ruling was personal.

“Like most people, I would like to get married one day and eventually raise a family. I hope that when my children are old enough to understand politics, they will be puzzled that someone like me revealing he is gay was ever considered to be newsworthy.”

I was well into adulthood before I was prepared to acknowledge the simple fact that I am gay. It took years of struggle and growth for me to recognize that it’s just a fact of life, like having brown hair, and part of who I am. Putting something this personal on the pages of a newspaper does not come easy. We Midwesterners are instinctively private to begin with, and I’m not used to viewing this as anyone else’s business.

Buttigieg was overwhelmingly re-elected in November 2015, becoming the first out LGBTQ person elected mayor in Indiana.

While serving, she was elevated to governor in 2015, after her predecessor was forced to resign. She became the second out LGBTQ person to serve as governor – the first being former New Jersey Governor Jim McGreevey, who came out in 2004 while in office and resigned a few months later.

Running in her first election for governor in 2016, Brown revealed the fear she felt as a new lawyer at the prospect of losing her job in the 1980s because she was dating a woman. Since then, she has worked hard to secure LGBT rights, including signing a bill banning so-called “conversion therapy” on minors.

“There are many things that young people need, but breaking them down based on their sexual or gender identity is not one of them—and in fact, it’s inexcusable,” Brown said during the emotional signing ceremony, The Advocate reported May 22, 2015. “Our young people deserve acceptance, support, and love. To the young people who question their identities, suffer from bullying, or struggle with what it means to come out, today is your day . . . Your voices have been heard.”

On November 8, 2016, Brown won her election with 51 percent of the vote, making history as the first out LGBTQ person ever elected governor in the United States. After completing the rest of her predecessor’s term, she ran for reelection in 2018, beating her Republican opponent by more than six points.

From ‘Don’t Ask, Don’t Tell’ to a Gay Army Secretary

Eric Fanning describes his historic Senate confirmation to be Secretary of the Army as “bizarre.”

Year of the Trans Candidate

Danica Roem made the biggest headlines in November 2017, yet other history-making trans candidates won their elections, leading Victory Fund to call it the “Year of the Trans Candidate.” Andrea Jenkins and Phillipe Cunningham won seats on the Minneapolis City Council, both becoming the first out trans people to serve on a city council in a major U.S. city. Lisa Middleton won election to the Palm Springs City Council, becoming the first out trans person elected to a non-judicial office in California, and Tyler Titus became the first out trans person elected in Pennsylvania when they won a seat on the Erie School Board. In just one election cycle, the number of out trans elected officials doubled nationwide.

A “Rainbow Wave” on Election Night

Intro-On Election Night 2018, media outlets across the nation and world reported a “Rainbow Wave” of LGBTQ candidates had won their elections – a narrative pushed by Victory Fund in the aftermath of an astounding year for LGBTQ candidates. At least 432 out LGBTQ candidates were on the ballot that November – the most ever – and an unprecedented 244 of them won.

The Chicago mayoral race had seemed like a long shot. With 13 candidates in the mayoral race and polls showing Lightfoot with little name recognition, many politicos were questioning her viability in late 2018. Yet Victory Fund’s political staff reviewed her campaign plan, analyzed her fundraising efforts and recognized her messaging was perfectly aligned with the mood of Chicago voters. In December 2018, Victory Fund became her first national endorsement, nearly four months before the primary. On Election Night, Lightfoot won all 50 Chicago wards and 73 percent of the vote, taking former Houston Mayor Annise Parker’s title as the highest-ranking LGBTQ mayor in U.S. history.

Leading at the highest levels

In federal, state and local bodies, LGBTQ officials wield the gavel, and more LGBTQ leaders of color, bisexual and transgender officials are elected than ever before.

Adjusting to Campaigning During a Pandemic, Hundreds of LGBTQ Candidates Win

In the nearly two-and-a-half centuries of the history of the United States, no major party has ever nominated an out LGBTQ candidate to lead a presidential ticket. In 2020, the Democratic Party came closer than ever to shattering the ultimate lavender ceiling.

In the three years since Danica Roem’s historic victory in 2017, in which she unseated a 24-year incumbent and became Virginia’s first out transgender state legislator, three other transgender women also won elections to become state legislators: Lisa Bunker and Geri Cannon of New Hampshire and Briana Titone of Colorado.

Early in 2020 Pete Buttigieg was making history as the first viable out LGBTQ presidential candidate in U.S. history and by the end of 2020 he was making history on an entirely new front. On December 16, 2020, President-elect Joe Biden nominated Buttigieg to be his Secretary of Transportation – an agency with more than 55,000 employees. Never before had a U.S. president appointed an out LGBTQ person for their Cabinet.

As the pandemic struck the United States and the rest of the world, Pennsylvania Secretary of Health Dr. Rachel Levine gained national notoriety for her thoughtful yet forceful response, including regularly televised press conferences where science reigned supreme. Her competency – along with much prodding by LGBTQ Victory Institute’s Presidential Appointments Initiative – convinced President Biden to nominate Dr. Levine to be his Assistant Secretary for Health on January 19, 2021.

In March 2021, Isabella Casillas Guzman, was sworn in as the 27th Administrator of the U.S. Small Business Administration. She represents the more than 30 million U.S. small businesses and is committed to helping small business owners and entrepreneurs start, grow and be resilient.

Almost 400+ LGBTQ candidates, with votes still coming in, who ran in the 2022 midterms have won their elections and surpassed the previous record of 336 set in 2020. That is an 18.1 percent increase. At least 1,065 out LGBTQ people ran for office this year — a historic number.