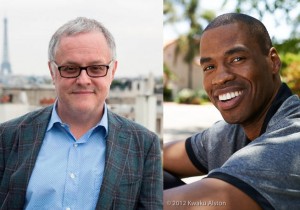 Los Angeles, December 2, 2014 – Point Foundation, the nation’s largest scholarship-granting organization for LGBTQ students of merit, today announced that Dr. Neal Baer and Jason Collins will join the Foundation’s honorary board. Exemplary role models in the LGBTQ community, Baer and Collins will serve with other LGBTQ leaders and advocates in an advisory capacity.

“It’s still not easy for all LGBTQ youth to come out, but it is better now than it was when I was growing up in Denver,” said Baer. “Everyone should have the right to live with dignity, respect, and safety; especially LGBTQ young people.”

Baer is the executive producer and showrunner for the CBS television show “Under The Dome,” and was executive producer of “Law & Order: Special Victims Unit” and “ER,” among other shows. He is a graduate of Harvard Medical School and holds master’s degrees in education and sociology from Harvard.

“People of all ages can be an ally to someone who is in need,” said Jason Collins. “It’s important to take the time to be a counselor, a mentor or just a positive role model. I want LGBTQ youth to know I am here for them and support their efforts to live an honest and happy life.”
Collins, a graduate of Stanford University, where he was an All-American, was formerly a professional basketball player and the first openly gay athlete to play in one of the major North American professional sports leagues. Baer and Collins each received the Point Leadership Award in 2014; Baer at the April Point Honors gala in New York and Collins at the July Point Leadership Dinner in Boston.

“Dr. Neal Baer and Jason Collins understand the important role education has in making it possible for young people to fulfill their aspirations and become the next generation of LGBTQ community leaders,” said Jorge Valencia, executive director and CEO of Point Foundation. “The Point Foundation family is fortunate to have Dr. Baer and Jason Collins on our honorary board as advocates for equality and educational advancement.”

For the 2014-2015 academic year, Point is providing financial assistance, mentorship, leadership development and community service training to 80 full-time students. Applications for Point scholarships are accepted online at www.pointfoundation.org/apply through January 20, 2015. Point will announce the new class of scholarship recipients in June 2015.