The House that Casting Built looks for diversity in storytelling 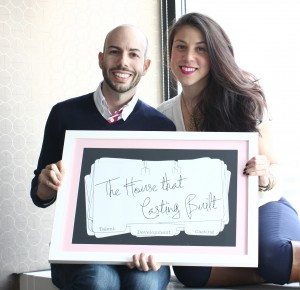 Risa Tanania and Anthony Lucente have always loved both storytelling and television. As children, both spent hours watching television, captivated by the stories playing out onscreen. As adults, both gravitated toward careers in television — Tanania in production and Lucente in scripted programming. Then they found each other, recognized kindred spirits and together created The House that Casting Built, specializing in authentic casting for all types of media.

Tanania got her start at the University of Iowa with a Master of Arts in intermedia studies. Her focus was mainly women, along with installation and video art, immersing her in the craft of storytelling. After coming back to New York and working in production, she realized that telling people’s stories was her real passion and made the switch to casting where she shines the spotlight on authentic voices.

Lucente began his career in the scripted world working for “All My Children,” one of his favorite childhood daytime dramas. His love for the story was what caused him to make the shift from production and writing to unscripted casting, where the talent is the story and finding the right person is both challenging and fun.

When the two met, they “fell in mad work-love together,” Lucente said. Referring to each other as “work spouses,” the duo have a strong friendship that provides the foundation for a successful professional partnership.

“We work better alongside each other than apart,” Tanania said.

The House, as Tanania and Lucente refer to their company, specializes in casting people who are the overall package — people who are not only good at their jobs or fit the casting breakdown for a project, but who have strong voices and their own followers.

“If you’re doing a commercial, and you want to have real people, real customers, or if you’re doing a holiday campaign and you want to find people to give miracles to, that’s where we come in,” Tanania said. “We often look for people who aren’t auditioning for a role, just living their lives, and we pluck them out of their towns and present an opportunity.”

“Exactly,” Lucente said. “It’s not about finding someone who looks the part, but what they bring as an overall package. You should be busy running your business; we’ll spend our time finding you. We want you because you are the right person already.”

“‘The Singles Project’ was very exciting because it was something brand new on TV,” Lucente said. “The show was extremely interactive, so viewers had a hand in what happened week to week.”

Diversity of the story within

Diversity is critical to The House, and Tanania and Lucente look for the diversity of the story within, in addition to original, strong voices.

“Diversity is important to us and those we work with,” Lucente said. “Diversity is everything — geography, ethnicity, sexuality, … ”

“ … body image, age,” Tanania continued. “Early in our careers, we recognized that there’s a lot of power in the audience seeing themselves reflected back.”

The House is a certified lesbian-, gay-, bisexual- or transgender-owned business, which Lucente says has presented opportunities to network and increase their own exposure.

“Being certified has been a great way to meet people that didn’t know we existed per se and vice versa,” he said. “A big part of our business — in addition to television — is branded content and digital ads, and the NGLCC gives us a platform to show people not in television how our left-of-center casting can benefit their campaigns. Being part of the NGLCC allows people to start a conversation and be creative.”