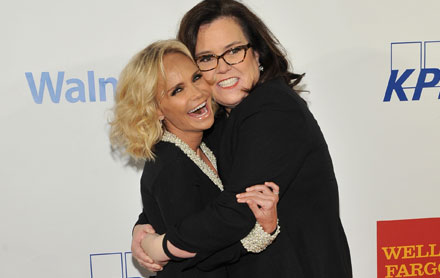 “I thought it was spectacular. It was, again, one of these perfect evenings where PFLAG and the Straight for Equality Project had this unbelievable opportunity, where we could elevate and honor the contributions of so many different kinds of allies,” Jean-Marie Navetta, director of Equality and Diversity Partnerships for PFLAG National.

“Every year, I think the mix is absolutely incredible. I just think that the mix this year was perfect because to me, it highlighted the intersectionality of LGBT inclusion.”

Actor/comedian Alec Mapa once again hosted the evening, and was joined onstage by auctioneer Mark Schenfeld who–thanks to donations from Marriott International, American Airlines, and the Tony Award-winning 2015 Best Musical FUN HOME–helped raise over $90,000 to benefit PFLAG National’s many programs, including Straight for Equality.

Others appearing on stage included FINRA Chairman and CEO, Richard Ketchum, and Wells Fargo Securities President Jon Weiss, who was on hand to accept the Straight for Equality in the Workplace honors, and spoke about the importance of diversity and inclusion at Wells Fargo.

“We had Wells Fargo, who has a significant presence in North Carolina, and has done incredible work on LGBT inclusion for so many years. And just the week before, they’d lit up their headquarters in North Carolina in the Trans Pride colors and a pink triangle. It was just one of those perfect moments where you think, “This could not have possibly been better timed,” Navetta said.

In the last few weeks, Wells Fargo became the largest employer in North Carolina to call for the repeal of the recently passed anti-discrimination ordinance.

“I am very proud to say that this declaration for inclusion and against discrimination came from the very top of our organization. Diversity and Inclusion is one of our five primary values of Wells Fargo and is a business imperative for the company.” Weiss introduced an acceptance video from Wells Fargo Chairman and CEO John Stumpf.

Honoree Chenoweth–an outspoken LGBTQ ally of faith–spoke about her Oklahoma roots, and how her family, including her conservative, religious grandmother, influenced her. She recounted asking her grandmother why some believed that people who were gay were going to hell. Said Chenoweth’s grandmother, “I read the bible like I eat fish. I take the meat that serves me well, but I don’t choke on a bone.”

Rosie O’Donnell, who was in attendance with her son Blake, presented the award to Chenoweth.

Best-selling author and TV host Janet Mock presented the inaugural Straight for Equality in Media honors to Dr. Harris-Perry. She shared, “[Dr. Harris-Perry] invited people who are so often silenced yet talked about and discussed, to be the experts of their own lives on national television. That is a rare gift.” said Mock. “To put it simply,” she added, “We are smarter because Dr. Harris-Perry exists.”

“It was intersection of LGBT in the workplace, in race, media, gender, and religion. The night was a dream come true, because working in the inclusion field, I recognize that we are never talking about any of these issues in a vacuum or in a solitary space,” Navetta. “Every single person is an intersection of a multitude of identities. and this was a perfect year and a perfect moment to have this chance to honor these people and entities, who recognize this fact.”