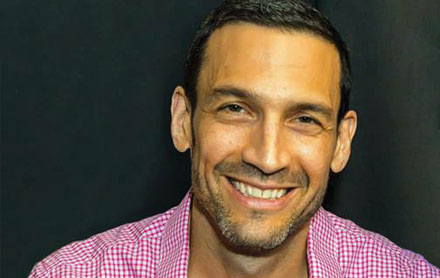 Dr. Steve Kramer is the kind of person who dreams about physics and math, then wakes up and turns those dreams into a viable business plan.

“Late in 2005, I was doing consultant work in the software space, and one night I started dreaming about mathematical Bessel functions,” he said. “I was having physics- and math-related dreams, and when I woke up, I said, ‘I have to get back into research more directly.’”

Kramer, who earned his Ph.D. in physics from the University of Texas at Austin, drew on his research background and connections with friends and colleagues in the applied math and graph analytics arena to form his company, Paragon Science Inc., in 2006. Using dynamic anomaly detection technology that he invented, Kramer is able to analyze any type of time-dependent data stream to find the clusters of entities that are changing in a way that is most unusual compared to the rest of the data set.

“A lot of machine-learning approaches require you to train the system,” Kramer explained. “You typically have to give other systems examples of what is normal and what is abnormal. The challenge is that, for online social networks like Twitter and Facebook and other transactional sites like eBay, there is rarely a stable baseline. The technology I developed applies techniques from chaos theory to enable robust anomaly detection in data mining.”

In May 2014, some six years after creating the technology and filing the initial application, Kramer was issued U.S. Patent # 8738652 for his invention, “Systems and Methods for Dynamic Anomaly Detection.”

Putting the dream to work

Dr. Kramer’s technology quickly drew the attention of the federal government, and he was invited to submit proposals for government research contracts. Unfortunately, the dynamics of the federal budget resulted in cancellation of the proposed projects, so he turned his focus to the private sector.

Early in the process of realizing his research, Kramer and his husband discussed different funding options and decided to bootstrap the business in order to maintain complete control.

“We didn’t want to go after venture capital because of negative experiences I had heard about from other entrepreneurs. By following a bootstrapping approach, there would be no external pressure to take a bad deal,” Kramer said. “It definitely took longer to get the business up and running, but it allowed us to chart the course we wanted.”

Entrepreneurship is not for the faint of heart, and Kramer is committed to providing support for other tech visionaries in the LGBT community. Several years ago, he became involved with StartOut, a national nonprofit organization dedicated to creating great business leaders by fostering LGBT entrepreneurs. He helped start the Austin chapter of Start- Out, serving on the local steering committee, organizing events, networking and mentoring.

In February 2014, StartOut hosted the first annual HackOut, a two-day, LGBT-oriented hackathon in which individuals and teams of developers, programmers, coders and entrepreneurs of all kinds came together to “hack” new demos in one weekend. At the end of the two days, participants presented their ideas or applications to a panel of judges for prizes, including consulting, cloud computing credits and capital.

“We had some really great results and were grateful to have the support of sponsors like Google, Facebook, Rackspace, Stripe, Heroku and a number of Austin firms,” Kramer said. “We are looking forward to hosting the next installment in February 2015. In particular, we’re hoping to encourage the formation of teams spanning multiple generations, from high school students to university students to seasoned programmers and entrepreneurs.”

Now that his technology is patented, Kramer is rewriting his code in a new framework, Apache Spark™, so it can be licensed to clients and partners to deploy the software themselves.

“The goal is to get to the point of scalable revenue generation,” Kramer said. “Ideally, I would like to close several software licensing deals next year, with more deals the following year. Eventually, I’d like some large company — like IBM or Google — to recognize the business value of the technology and buy it and the patent outright. That’s my long-term vision.”