OBOX’s Tim and Thom DeWitt are making a difference 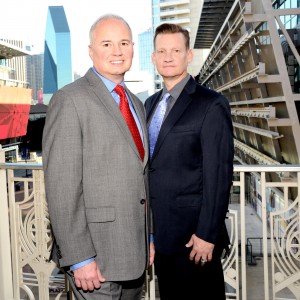 OBOX Solutions is the brainchild of married couple and co-owners Tim and Thom DeWitt whose philosophy maintains that lasting relationships are accomplished by having an out-of-the-box mentality toward both staffing and life.

The company has more than 90 years of combined experience in recruiting, professional services and human resource management. And through all the ups and downs of the economy and life, OBOX has remained strong as a supplier to several Fortune-ranked companies. Its roster of clients includes Hewlett-Packard Co., American International Group Inc., Fidelity Investments, SITA, Brink’s Inc., American Gypsum Co. LLC and Copart Inc., to name a few.

Tim DeWitt serves as CEO and Thom DeWitt as chief operating officer. Soon after joining the National Gay & Lesbian Chamber of Commerce and completing the certification process, OBOX became the first NGLCC-certified business to become a corporate partner. As an NGLCC corporate partner, OBOX is committed to completing the circle of diversity by purchasing and doing business with other lesbian, gay, bisexual, transgender and diverse enterprises, building economic empowerment for the LGBT community. It works with LGBT-certified companies, including Proximo Consulting Services Inc., Insala and Integrity Staffing Solutions Inc., to name a few.

“It happens that we’re gay business owners, but if you take the gay away or take any type of diversity away, it comes down to doing business as anyone else,” Tim DeWitt said. LGBT business enterprise certification identifies businesses as being LGBT-owned. The NGLCC’s certification and resources available from the U.S. Small Business Administration aren’t handouts, but they are a hand up. “It doesn’t give you a special place at the table just because you are a diverse supplier or you have certain things in your life that have made it more difficult for you,” Tim DeWitt said. Certification is a way for you to be OUT in business and get access to opportunity.

Top of its game

Tim and Thom DeWitt have received the Supplier Diversity Champion award from the North Texas GLBT Chamber of Commerce and Thom received a Tuck School of Business Executive Education scholarship from NGLCC, recognition that has translated into satisfied clients.

“OBOX works with us to fill our particular needs quickly, and it is good to the people it places at our company, which makes for a positive working relationship from the start,” said Greta Tarar, senior manager, information technology services, American Airlines Inc. “It listened carefully to our needs, asked questions and tried to identify specific strengths that would make for the best fit and went to work right away. Because Thom knows what to look for, his candidates are usually a great match.”

When OBOX places a candidate on assignment with a client, they follow up with the management team, as well as the candidate, to make sure the placement is a good fit for everyone involved.

Due to the gravity of Tim’s cancer diagnosis, University of Texas MD Anderson Cancer Center in Houston became the DeWitt/OBOX command center. Tim DeWitt required six rounds of aggressive chemotherapy, each requiring five- to seven-day hospital stays. That’s why Thom DeWitt brought in laptops and computers, and they didn’t lose a day of work. Although they were facing adversity, the team of more than 30 employees and their families were depending on them. Staring cancer in the face and keeping a business afloat requires grit and a dogged determination that can only come from an inner strength emanating from both Tim and Thom DeWitt.

“There’s no sense in worrying about things you have no control over. When you’re dealt a terminal illness or some hardship in your life, you can worry yourself to death about it or determine to make the best of what you have today. But, if there is a possibility that you have the ability to affect the outcome, then there’s really no sense in wasting your energy on negativity. Redirect that energy positively to something you can affect,” Tim DeWitt said.

The DeWitts have surrounded themselves with a powerful personal and business support system to see them through some of the hard times they have had. David Sims, director of recruiting, has been with OBOX since the beginning. They also rely heavily on Diane Graff, director of sales, five full-time recruiters and the rest of the OBOX Solutions family. “It can be stressful at times,” Tim DeWitt said. But, Tim and Thom DeWitt have each other and the good will they’ve cultivated.

Fabric of the community

When the economy went into a slump, the DeWitts realized that a lot of the nonprofits they worked with were seeing their funding from government entities and philanthropy slashed, threatening their ability to provide much needed services to the community. “We decided that we needed to give away 30 percent of everything we made to the organizations that we support. That was a difficult task to undertake, yet we made adjustments and gave until it hurt,” Tim DeWitt said

The DeWitts philanthropic side extends to other borders. Some years ago, they traveled to Peru to do a form of “voluntourism” and became active supporters of a nonprofit called Ayni that gives microloans to women in poverty to help bring stability into their villages.

“We do things like raise money to build stoves in their homes, because they usually cook in a hole in the ground. This [hole in the ground] leads to a lot of the women and children having burns all over their bodies because they would catch on fire while cooking,” Thom DeWitt said. The DeWitts have even built a library and given scholarships for the youth to attend nursing school, which is a skill sorely needed in their villages.

Tim and Thom DeWitt’s generosity is global, and they give to causes related to education; poverty; LGBT and cancer. They support an endowment at Texas Tech University that was established in memory of Tim DeWitt’s parents, J.W. and Marcella DeWitt, who raised 12 children without graduating from high school themselves. “When our hearts are touched, we really want to work with you,” said Tim DeWitt.

A graduate of The University of Texas at Austin, Thom DeWitt is a former corporate employee turned educator, earning a master’s degree in educational administration to become a vice principal. Tim DeWitt worked for Lubbock Methodist Hospital Foundation as a grants coordinator, until moving to Dallas to join Lomas Financial Corp. where he became an assistant vice president. He later worked as a sales and recruiting manager, then director and president of several IT, consulting and staffing firms.

Tim and Thom DeWitt were joined in a civil union in Vermont on Nov. 24, 2000, and were later married in Toronto, Canada, in July 2003. They are active members in the International Gay and Lesbian Chamber of Commerce, NGLCC and Equality Texas. They also support Lambda Legal, The Leukemia & Lymphoma Society’s Team in Training program, American Cancer Society Inc.’s Relay for Life and Lone Star Ride Fighting AIDS.

“Not everyone will agree, but the most rewarding part has been to have a partner by your side on a daily basis to help make decisions that benefit our company, employees and deepen our relationship,” Tim DeWitt said. “There is a great deal of faith that helps us become a stronger company and — in the end — strengthens our relationship.”