Many procurement opportunities exist for LGBT businesses in Houston, according to Annise Parker 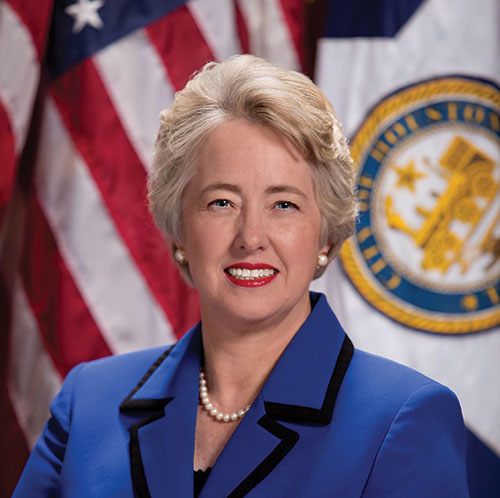 Procurement opportunities abound for lesbian, gay, bisexual and transgender businesses that use a little savvy and insight to land contracts that will take them to the next level of success.

That’s the assessment of former Houston Mayor Annise Parker, who fought for gender equality during her tenure as mayor from 2010-2016. She also served on the Houston City Council from 1998-2003 and was city controller from 2004-2010.

“The economy has clearly slowed down, which affects all kinds of businesses from large to small,” she said. “That said, Houston has always had a vibrant small business community.”

After leaving Houston city government, Parker joined Rice University’s Doerr Institute for New Leaders, where she has been named a Doerr Institute fellow and teaches for the School of Social Sciences.

“As a big, fast-growing area, there are always opportunities for suave and aggressive business people to find opportunities to exploit,” she said. “Particularly for LGBT [lesbian, gay, bisexual and transgender] businesses because a lot of companies have discovered that we are a good market.”

Parker — who was Houston’s second female mayor after Kathy Whitmire and one of the first openly gay mayors of a major U.S. city — has had her share of roadblocks in her fight for a level playing field for lesbian, gay, bisexual and transgender businesses.

A yearlong battle over gay and transgender rights turned into a costly, ugly war of words between her and social conservatives over an antidiscrimination ordinance that attracted national attention. The ordinance was called HERO or Houston Equal Rights Ordinance.

The City Council passed the measure in May 2015, but the ordinance lost its footing after opponents successfully put the matter to a referendum. The measure failed by a vote of 61 percent to 39 percent.

The ordinance prohibited bias in housing, employment, city contracting and business services for 15 protected classes, including race, age, sexual orientation and gender identity. Opponents successfully turned the debate from one about equal rights to one about protecting women and girls from sexual predators in restrooms.

“The vote on HERO was something of an anomaly,” Parker said. “Houston is an open and welcoming place — not just to LBGTs [lesbians, bisexuals, gays and transgenders], but [also] to the many immigrants we have. We are an international city that has an open and tolerant attitude. We understand that the goal of business is to make money.”

She advised LGBT enterprises to become certified as small businesses — an especially important move because most corporate and government diversity policies do not apply to the lesbian, gay, bisexual and transgender community.

“They should also take advantage of resources at the City of Houston’s Office of Business Opportunity,” Parker said. “They do a lot of training on how to get bonding and insurance, how to become certified and how to navigate government.”

Last year, the Office of Business Opportunity partnered with community-minded attorneys to establish a Virtual Legal Lab, which provides one-on-one Skype sessions with lawyers for any business-related questions.

“The Office of Business Opportunity is pleased to continue our partnership with Vinson & Elkins [LLP] and the Association of Pro Bono Counsel,” said Carlecia D. Wright, director of the Office of Business Opportunity. “We are always looking for additional ways to provide our businesses with the resources they need to be successful and obtaining sound legal advice is an essential part of it.”

Lesbian, gay, bisexual and transgender business owners may also want to consider expanding their boundaries beyond the U.S., Parker said.

“We are the most diverse city in the U.S. and the most international,” she said. “There are lots of resources for those who want to do business internationally. The city works with the federal Export/Import Bank [of the United States] and the [U.S.] Small Business Administration offers federal assistance for particular expenses.”

Closer to home, the City of Houston buys an amazing array of goods and services — everything from light bulbs to toilet paper to car tires and batteries to professional services, Parker said.

For more information about the Houston Office of Business Opportunity, visit https://houston.mwdbe.com.