At 26, Samuel J. Rosenmayer has made bold statements with his watch designs and his life
By Brenda M. Beveridge 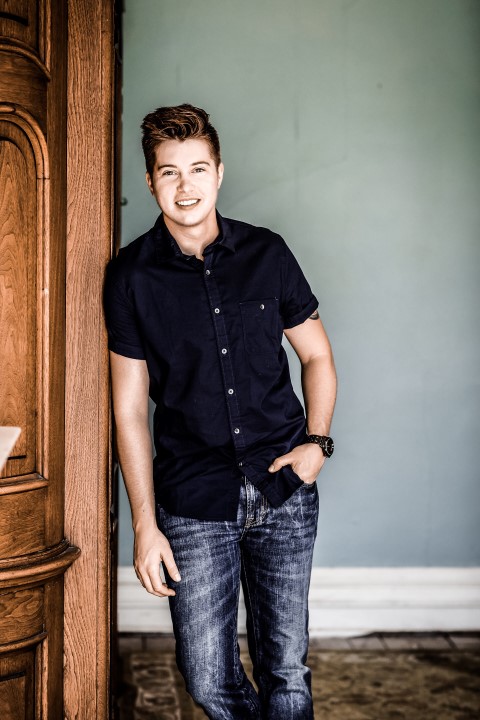 The functions of the movement are what dictate the design of a watch and dictate where certain parts have to go.

The essence of a Samuel James watch picks a movement inside the watch, brings it to the surface and designs the watch with that particular movement and dimension in mind.

“I had a vision of creating a distinctive and reliable timepiece that exposed details and craftsmanship,” said Samuel J. Rosenmayer, founder and owner of Samuel James Watches.

The journey began when he was pursuing  the internet for a unique watch.

“I’ve always loved watches. The first watch I ever got was a pocket watch my dad gave me. I think they are such a cool accessory,” Rosenmayer said. “I always like having watches that most people don’t have. I didn’t want the same watch as the person down the street from me.”

Not finding anything that stood out to him, he took out his sketchpad and began drawing.

“I wanted my watch to be very different and have certain details that didn’t exist, like a hexagon shape. So, I began drawing and drawing and drawing,” Rosenmayer said. “I asked a couple of people in my life, what they thought of my designs.

They were like oh my God, that’s amazing. You should make those. My next question was always, how do you make a watch?”

With no engineering or design background but armed with his sketchpad and determination, he set off to talk with fifteen to twenty manufacturing companies all around the world. He finally found one that he was very comfortable with and wouldn’t break the bank.

A year before the quest for his business began but with the same determination Rosenmayer began the transition process from female to male at the age of 25 years old.

“This is something I knew since I was six or seven.  I spent most of my life trying to suppress it and pretend that feeling wasn’t there and that didn’t work out to well,” Rosenmayer said. “When I accepted and embraced it, everything fell into place. Things that really bothered me are no longer there. So I am extremely happy. This is the healthiest I have ever been.”

Although, at present he is fully transitioned, it did not come with out its challenges.

“It was terrible, absolutely terrible. The first six months, you’re on hormones and you still have boobs and your face gets masculine and people don’t know what you are. And it took me awhile to update all of my legal documents so I found myself constantly explaining to people that I am gender transitioning . They look at you like you’re a different species. I think the beginning months, before people could tell I was a man were the worst. It was awkward with bathrooms and lockers rooms.”

When he went to change his name from Samantha to Samuel and change his gender, he had to go before a judge that was looking for every excuse to not allow this change.

Fortunately, once every T was crossed, I was dotted and surgery was complete, Samuel Rosenmayer stepped out in to the world with a whole new lease on life.

“It was amazing. It was very nice to be acknowledged for who I was now. It is so nice to hear people say, thank you sir, or just acknowledge that I am a man, and my name is Samuel. It’s great. Its absolutely wonderful,” he said.

He believe strongly that it’s important and seek people that are supportive.

“Maybe it’s not always your family. Maybe it’s a couple of friends or maybe in your circumstances there is no one. There are other resources out there. In Chicago there are LGBTQ resources that will not charge anything for counseling. They can provide hormones at an extremely discounted rate.”

If your mind is settled on transitioning, it’s important to do as much research as possible.

“I didn’t know anyone in the LGBT community. I grew up in a very conservative household so I was not aware hormones and surgeries were available to those who desire to transition. There is so much research you could do online now that I think anyone can find helpful informationnd resources.

As unique as Rosenmayer is, his timepieces are even more so and he wants his customers to understand his designs.

“I wanted to do what other companies are not doing but I wish they would. Like explaining watches and how they function and why some are $3 and why some are $2000, what is the main difference? I really wanted to inform the customer of what they were purchasing how quality is a lot more important in the end,” he said.

Everything is out there. There’s no pretending it’s good quality.”