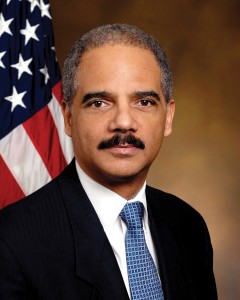 U.S. Attorney General Eric Holder announced his resignation on Sept. 25, 2014, and will step down as soon as the U.S. Senate confirms his successor. A stalwart supporter of civil rights of LGBT individuals, he said that one of his greatest accomplishments was aiding in “the promise of equality for our LGBT brothers and sisters and their families.”

The country’s first African-American attorney general, Holder’s tenure at the U.S. Department of Justice includes the implementation of reforms to the criminal justice system and enforcement of major civil rights initiatives, including lawsuits against Texas and North Carolina for obstructive voting laws. It is Holder’s record on LGBT rights, however, that sets him apart from his predecessors and charts a new course for LGBT individuals. In February 2011, he announced that the Obama administration would no longer defend the constitutionality of the 1996 Defense of Marriage Act, which denied federal benefits to married same-sex couples. Further, he argued for the right of gay and lesbian couples to marry, which led to a groundswell of lower-court decisions granting marital rights to gays and lesbians.

One LGBT advocacy group praised Holder’s commitment to equal rights and encouraged the President to pursue the appointment of an openly LGBT replacement.

“President Obama faces a historic opportunity in light of Attorney General Holder’s departure,” said Chad Griffin, president, Human Rights Campaign. “The President has expressed a commitment to appointing a cabinet that reflects the full diversity of the American people, and there are many richly qualified candidates available to serve as the first openly LGBT cabinet secretary. It would be a natural extension of this administration’s enduring commitment to equality to send a message of visibility and inclusion by nominating such a candidate to serve in this historic role.”

President Obama added his own words of commendation for Holder’s achievements.

“As younger men, Eric and I both studied law. And, I chose him to serve as attorney general because he believes, as I do, that justice is not just an abstract theory. It’s a living and breathing principle,” he said during the White House press conference in which Holder announced his resignation. “Several years ago, he recommended that our government stop defending the Defense of Marriage Act — a decision that was vindicated by the Supreme Court and opened the door to federal recognition of same-sex marriage and federal benefits for same-sex couples. It’s a pretty good track record.”