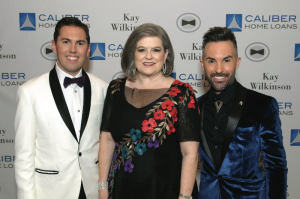 On November 10, 2016 at the Wrap Party & Beneficiary Distribution event checks were presented by Black Tie Dinner board members to community leaders of the 16 North Texas LGBT-supportive beneficiaries and the Human Rights Campaign Foundation.

“We were thrilled to announce our 3rd highest distribution in our 35 year history, and the highest in 9 years. We cannot thank our sponsors, table captains, underwriters and volunteers enough for their contributions to this successful dinner for our community,” said co-chair Mitzi Lemons.

In addition to the check presentations, Black Tie Dinner unveiled a new logo and branding, which was developed pro bono by renowned advertising agency TracyLocke. Black Tie Dinner Chairs and Marketing Committee Co-Chairs Brad Pritchett and Aaron Wolfe partnered with the powerhouse agency for a year developing the new look.

“The new logo and branding honor Black Tie’s history of aiding those in need and reaching the broadest of people while giving the organization a fresh, new look focused on vibrancy, versatility and expressiveness,” said Black Tie Dinner Co-Chair Nathan Robbins. “It was time for a facelift and we believe our new brand will inject even more life into our organization while helping us attract a larger audience of LGBT supporters,” added Lemons.

“We are beyond excited to have our long-time partner BBVA Compass as our 2017 Presenting Sponsor,” said Nathan Robbins, Co-Chair. “This level of engagement from them, at both the local and national level, will help us in many ways, most importantly in helping us raise money for all of our beneficiaries.”

The main fundraiser took place on Saturday, October 3, 2016  and welcomed more than 2,500 guests for a spectacular evening of empowerment, education and entertainment. Since the first dinner in 1982, the all-volunteer organization has raised more than $20 million dollars in funding to local and national community support organizations.

This year’s dinner was co-chaired by Lemons and Nathan Robbins, who, along with the entire Black Tie Dinner Board and hundreds of volunteers, worked for a full year creating and producing the annual fundraiser which has become one of the most anticipated and attended events of the year. 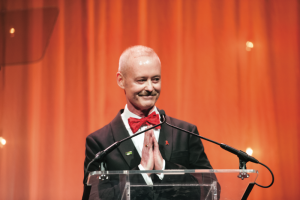 The program opened with the presentation of the annual Kuchling Humanitarian Award to Dr. Steven Pounders for his positive impact on Dallas’ LGBT community. During his acceptance speech, Dr. Pounders recalled the devastating impact of HIV/AIDS as it began ravaging communities across the nation and how he was among a handful of doctors who were willing to help those affected by the disease. 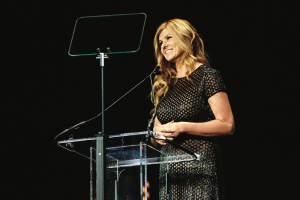 Following Pounders’ award, hotelier Liz Lambert presented the Ally for Equality Award to Emmy nominated actress and UNDP (United Nations Development Programme) Goodwill Ambassador Connie Britton. In her remarks, Britton affirmed her commitment to fighting for equality for the LGBTQ community so that her young son can live in a world where equality is the norm.

Multi-talented entertainer and Texas native Todrick Hall performed two musical numbers, including an emotional song he wrote in response to the tragedy at the Pulse nightclub in Orlando. For the latter performance, Hall was joined on stage by singer Vonzel Solomon for a moving duet.

During his speech, Human Rights Campaign President Chad Griffin highlighted the importance of this year’s presidential election and emphasized how our votes are crucial to ensuring that we remain on a path toward full equality in the United States.

Comedienne Dana Goldberg entertained as the returning host of Black Tie Dinner’s Luxury Auction – using her trademark comedy and auctioneering skills to raise over $100,000 in the room.

Upon receiving the Elizabeth Birch Award, Olympic Gold medalist and LGBT activist Greg Louganis shared with the audience how much progress has been made since he came out and revealed that he had been living with HIV decades ago. He also shared a moving message that he wrote to his 16-year-old self about the progress he would see in his lifetime and the pride he has for his younger self. He also announced that Dallas will apply to host the 2022 Gay Games. 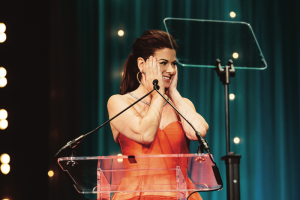 Actress Debra Messing was presented with Black Tie Dinner’s annual Media Award, which is presented to an individual or industry leader who has demonstrated a solid commitment to bringing public and media attention to major LGBT issues. During her acceptance speech, Messing recalled the impact that HIV/AIDS had on her as a young college student at NYU and how her time on the hit show Will & Grace positively impacted our culture and the progress we’ve made toward equality.

The dinner closed with an incredible performance by multi-platinum recording artist and actress Deborah Cox. As a prelude to her starring in The Bodyguard musical, which will run at Dallas Summer Musicals and Bass Performance Hall in the summer of 2017, Cox channeled Whitney Houston by singing two of the late star’s hit songs from the record- breaking soundtrack of The Bodyguard film.

The proceeds raised from Saturday’s event will be distributed on November 10th, at the Fairmont Dallas in the newly renovated Venetian Room.

Black Tie Dinner is a non-profit organization that raises funds for lesbian, gay, bisexual and transgender (LGBT) supportive organizations serving North Texas through a premier event of empowerment, education and entertainment that has grown into the nation’s largest LGBT fundraising dinner since its inception in 1982. The first dinner produced a $6,000 donation to the Human Rights Campaign Foundation, and has since raised over $20 million for national and local beneficiaries. Black Tie Dinner continues to be the most successful dinner in the country supporting the Human Rights Campaign Foundation, and has the distinction of being the only dinner also benefiting local beneficiaries.

Photography by Sheryl Lanzel and The Black Tie