Athlete Ally promotes inclusiveness on and off the field 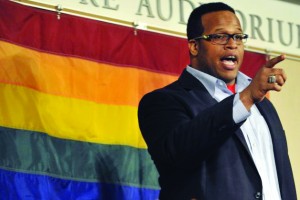 Soon after enrolling at the University of Maryland, Hudson Taylor befriended lesbian, gay, bisexual and transgender students in his theatre classes and became increasingly aware of the pain caused by homophobic behavior. After years of witnessing the use of homophobic language and demeaning humor — especially in sports — he knew he could not stay silent.

Taylor is not gay, but he recognized that standing up against this type of behavior as a straight ally would send a strong statement. As a symbol of solidarity with the community, Taylor wore an LGBT equality sticker from the Human Rights Campaign on his wrestling headgear during collegiate matches. His peers criticized him, but the media response was positive. He received thousands of emails from parents and closeted athletes expressing thanks and sharing their own experiences of homophobia and transphobia in sports.

Board member Robert Smith, global chief product officer for Haddad Brands, joined Athlete Ally in 2013, after serving on the board of directors for the Hetrick-Martin Institute, an organization serving at-risk LGBT youth. He was looking for an organization that was supporting the LGBT community in impactful and innovative ways. After meeting Taylor and learning more about Athlete Ally, he knew he had found the right fit.

“We’re at a tipping point right now with homophobia and transphobia in sports,” Smith said. “Sports reaches everyone in some way. When you think about how you can impact youth and their thoughts, you do it through sports. When athletes stand up and say, ‘Hate is not okay,’ things will start to really change.”

In February 2014, Taylor and Smith traveled to Sochi to speak out against Russia’s anti-gay laws and to campaign for the addition of sexual orientation and gender identity to the International Olympic Committee’s antidiscrimination clause, Principle 6. In December, the IOC voted to update the clause to explicitly include “sexual orientation,” not only furthering inclusiveness for athletes, but also making LGBT people’s treatment and rights in the country a determining factor when choosing host cities for future Olympic Games.

Patterson is himself a veteran of Olympic training — a four-time Greco-Roman All-American for USA Wrestling and four-time world team trials qualifier — he competed through two Olympic cycles. Due to the restricted number of wrestlers allowed on an Olympic team — only one per weight class — Patterson did not compete in the Olympic Games, but remains committed to the sport and to promoting inclusion across all athletics after his own difficult experience coming out while playing collegiate football, where he was a two-time NCAA All-American.

Realizing that his heart was not in football, Patterson returned to wrestling, working his way up to director of programs at the Terrapin Wrestling Club at the University of Maryland, where he coached a wrestler named Hudson Taylor.

“I had gone back in the closet for the most part,” he said. “My family knew, but professionally, I was back in the closet. I just wanted to be part of the crew, to be a coach and an administrator, so that’s what I focused on. Hudson was on the team, and I heard him say a lot of positive things. He was very supportive of people, and I remember thinking, ‘Man, I wish I could have been like him.’ Just somebody who was brave and confident.”

As a black gay man, Patterson had no role models. There was no one he identified with — especially in sports. When Taylor began standing as an ally for gay athletes, he unknowingly stood up for his coach as well.

“Without Hudson knowing his coach was gay, he was speaking up for people like me,” Patterson said. “I realized that I needed to stand up for myself, and I needed to help Hudson spread his message.”

Patterson put Taylor in contact with a media outlet, and his story gained national attention, leading Taylor to found Athlete Ally. Patterson joined the organization about a year later as the youth programs leader, building on his passion to work with young people and engage them in conversations about discrimination.

In his new position as community affairs coordinator, Patterson is working with Athlete Ally’s corporate partners, need-based organizations, local organizations, campus programs and youth programs to coordinate and support their antidiscrimination initiatives. He has connected with the LGBT equality work that MillerCoors LLC has been doing.

“MillerCoors has a strong commitment to LGBT equality as is evident in our partnerships and our ten-year strong 100 percent rating on the Human Rights Campaign Corporate Equality Index. We choose to work with Athlete Ally not just because of the organization’s mission, but also because of the work that Akil has taken on as a leader. He embodies what we should all be doing to secure equality everywhere,” said Douglas Sanborn, manager, community, commerce and partnerships at MillerCoors.

“We’re working with everyone, right down to the guy selling hot dogs,” Smith said. “Because when you have straight allies standing next to you, you feel stronger; you stand taller and people listen.”