USHCC’s Palomarez says, “We are our brother’s keepers”

For the United States Hispanic Chamber of Commerce, a commitment to advocating on behalf of the LGBT community is a commitment to bringing together two communities that are learning to embrace each other. USHCC’s efforts on behalf of LGBT business owners transcend emotional and social issues and are, quite simply, good for American business.

“USHCC is first and foremost a business organization,” said Javier Palomarez, USHCC president and CEO. “We look at everything through this lens of commerce, and economics, and job creation and so forth. While LGBT issues are often seen as human rights or civil rights, we believe that discrimination against any group poses a serious threat to a healthy and thriving business environment.”

USHCC actively promotes the economic growth, development and interests of more than 3 million Hispanic-owned businesses that contribute over $468 billion to the American economy every year. It also advocates on behalf of 211 major American corporations and serves as the umbrella organization for more than 200 local chambers and business associations nationwide. In recent years, USHCC has launched initiatives to reach out to LGBT business owners, seeking to build a coalition that benefits all businesses — no matter the shape, size, color or gender. This focus on inclusion is a refl of the diversity of USHCC’s membership and the organization’s own professional environment.

“We’re blessed to have a wide array of personalities, cultures, genders, ages, religions and sexual orientations,” Palomarez said. “I think that the whole team at USHCC tries to live a set of values that embrace a different thought and a variety of perspectives. I think for us, it’s something that we value as a competitive advantage for what we do and who we are. That diversity informs the strategies around everything we do.”

Those strategies target two areas in particular — fighting discriminatory legislation and recognizing those in corporate America who advocate for the LGBT community within the business sphere.

Earlier this year, USHCC partnered with the National Gay & Lesbian Chamber of Commerce, corporate America and other business organizations to fight a bill put forth by the Arizona state legislature that would have allowed businesses to deny services to gays and lesbians based on religious objections. A national outcry arose over this attempt to curtail civil rights, but the bill also struck USHCC as a potentially devastating piece of legislation for Arizona’s economy. 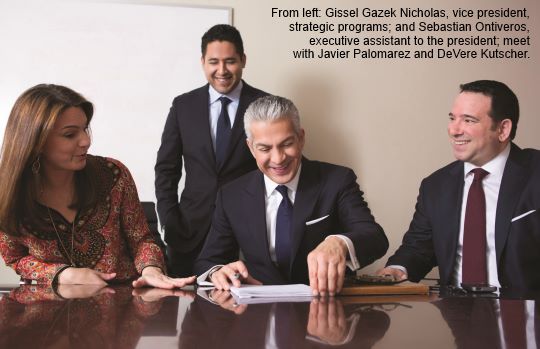 “The reality of the bill is that it goes beyond the gay and lesbian community,” Palomarez explained. “Once you start getting into that realm, it is a very slippery slope. Through a concerted effort between business groups and corporate America, we were able to pressure Gov. Jan Brewer into vetoing what we considered to be a terrible bill — terrible certainly for the gay and lesbian community, but even more terrible for the Arizona economy.”

Excluding segments of the consumer base is a surefire way to curtail economic growth, he said. Not only are customers turned away, it sets a precedent to discourage diverse business owners from expansion and job creation.

Recognition of individuals and corporations who are advocates for the LGBT community is another important part of USHCC’s initiative. At the 2013 USHCC National Convention, the organization held its fi LGBT business leaders reception and presented the inaugural LGBT Business Advocate Award to George Carrancho of American Airlines Inc. He was honored for his dedication in leading American Airlines’ outreach to LGBT and Hispanic partners and supporting the growing travel needs of those communities.

“American Airlines has been a strong ally and a strong partner of ours and of the gay and lesbian community,” Palomarez said. “It sees that thriving, upwardly mobile, loyal consumer segment as one that is critical to its bottom line. George has, in our mind, illustrated some visionary leadership in terms of bridging the relationships that exist between American Airlines and the broader business community, LGBT business community and other nonprofits like USHCC.”

Carrancho, in turn, lauds USHCC for its commitment to embracing, recognizing and advocating for the LGBT community. “I was deeply touched that the chamber felt so strongly about its commitment to LGBT partners and engagement that I was honored with the very first LGBT Business Advocate Award,” he said. “That [honor] spoke volumes about the chamber’s dedication to equality and respect for all.”

USHCC plans to continue to celebrate and acknowledge those individuals within corporate America and the public sector who exemplify the courage and leadership necessary to ensure that the LGBT community takes its rightful place at the table, Palomarez said.

“The challenge will be to ensure that corporate America gets more and more comfortable exercising its right to an opinion in matters of discrimination,” he said. “We want to support leaders like the people at AT&T, Goldman Sachs and Wells Fargo who have taken an active role and said, ‘You know what, this is perhaps more on the social issues spectrum. But, the reality is that we won’t tolerate it. We don’t tolerate it in our workplace, and we won’t tolerate it in the marketplace.’”

The recent national spotlight on LGBT and small business issues is a strong motivator for USHCC, which has set the goal of being accountable for its LGBT constituency, as well as other minority business owners.

“We will continue to look across the aisle and make sure that we act as our brother’s keepers,” Palomarez said with conviction. “It’s about continuing the collaboration, continuing to remind America that American small business comes in all shapes, sizes, colors, orientations, etc. [LGBT inclusion in the marketplace] creates economic development; it all creates jobs; it all pays taxes.”