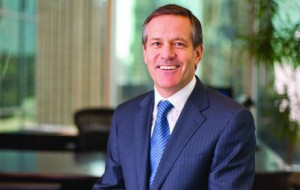 In 2012, John Taft, CEO of RBC Wealth Management-U.S. and great-grandson of President William Howard Taft, joined more than 50 current and former CEOs to publicly oppose a constitutional amendment that would have banned same-sex marriage in Minnesota. For Taft, marriage equality makes sense economically and personally.

Diversity and inclusion are more than buzzwords for Taft and RBC; they are crucial tools for succeeding in business. As the eighth largest full-service retail brokerage firm in the U.S., with nearly 1,900 financial advisors in 41 states and over $281 billion in assets, RBC serves a client base representing a variety of demographics.

“The world is becoming more diverse — not less diverse,” Taft said. “Every business out there has a customer base or client base that is more diverse today than it was several decades ago, and will be more diverse in the future than it is today.”

In an increasingly diverse marketplace, Taft said businesses must focus on both the quality and diversity of the organization’s employees.

“No. 1 — you must attract and retain the best possible employees you can,” he said. “In the financial services industry, employee quality directly impacts customer service and client satisfaction, so you need the best and most productive employees you can get. No. 2 — you need to make sure your employee base reflects your customer base. There is no way you can serve a client base well unless your employees understand your clients.”

Recognizing that the number of LGBT-owned businesses and investment portfolios are growing and will only continue to grow, RBC is committed to ensuring that its employees understand the needs of the LGBT community through advisor training.

“In 2014, we launched a marketing campaign containing information and tools for advisors to work with same-sex couples, managing wealth and setting up estate plans,” Taft said. “There is a lot of activity in that space, as LGBT couples get married and take advantage of the same benefits and structuring opportunities that heterosexual couples have had for years.”

A culture of inclusion

RBC is also committed to diversifying its own employee base by attracting and retaining LGBT employees. For five years, RBC Wealth Management-U.S. has earned 100 percent ratings from the Human Rights Campaign in its Corporate Equality Index as one of the Best Places to Work for LGBT Equality. This rating is evidence of the company’s commitment to supporting its diverse employee base and inclusive culture.

In addition to consistent monitoring of best practices and standards, when the Defense of Marriage Act was overturned in 2013, RBC agreed to gross up employee compensation to equalize for the tax effect of health benefits for partners in states where marriage was illegal.

“We agreed, unilaterally and without anyone asking us, to adopt tax equalization,” Taft said.

In 2012, the company also changed its human resources and benefits policies to pay for counseling related to transgender surgery, furthering the culture of accepting and celebrating differences within RBC.

The biggest challenge to creating a culture of inclusion and equality, Taft said, is the unconscious bias we bring to any situation.

“You have to work hard to first build awareness and then mitigate those biases,” he said. “The best way to mitigate bias has always been to build relationships across diversity boundaries. Make sure people run into, have contact with and develop friendships and relationships with people who are different from them.”

To that end, RBC commissioned a study in conjunction with Ernst & Young and Dr. Mahzarin Banaji, Harvard University professor of social ethics and co-author of “Blindspot: Hidden Biases of Good People,” to review unconscious bias and develop tools and strategies to conquer it within RBC.

When the program rolled out last year, Taft and other senior executives went through the resulting workshops first, acknowledging their commitment to identifying and overcoming their own biases.

“If your business is a place where people feel they can come every day and be fully themselves — authentically who they are — engagement levels are higher, which leads to all sorts of positive outcomes,” Taft said. “In our case, it means better client service, which means higher client satisfaction.”

Taft’s commitment to LGBT equality goes deeper than recognizing positive economic impact, however. His daughter came out when she was 16, which did not come as a surprise to Taft or his wife.

“I watched the difficulties she had — even in the very progressive school that she was in,” he said. “Her mom and I couldn’t be more accepting and open and proud of her courage and the choices she made. Nonetheless, I saw how she was treated differently and how her life was more difficult because she was gay. She happened to have the forceful personality and the smarts and the talent to overcome that [difficulty], but many people don’t. Even today, coming out is such a painfully difficult experience for many. That’s so unnecessary and sad.”

When Minnesota was debating whether to add a constitutional amendment banning same-sex marriage in 2012, Taft was a vocal opponent. He supported the “Vote No” campaign publicly and eloquently, hoping that if it was successful, it would be a turning point in acceptance for same-sex marriage nationally. In May 2013, Minnesota legalized same-sex marriage, and to date, 38 states have followed suit.

Taft continues to promote equality publicly and privately, hoping for the day when same-sex marriage is a non-event.

“It always comes down to a human value for me,” Taft said. “We’re all equal. No one is more or less special than anyone else. That [value] is where my support for LGBT equality comes from.”