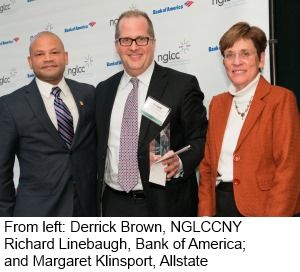 “The organizations that make up the NBIC account for more than $9 trillion in consumer spending power,” said Justin Nelson, NGLCC president and co-founder. “This event calls attention to those leaders and companies who recognize the valuable contribution diverse communities make to the marketplace and workplace.” 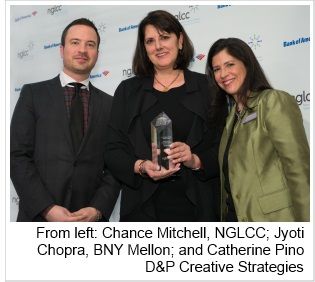 The awards ceremony has been hosted by the NGLCC for the past seven years to recognize financial services companies, diverse business advocacy organizations and government agencies and their support of diversity and inclusion.

NBIC paid tribute to two companies and one individual in a variety of categories.

• BNY Mellon was given the Financial Services Diversity Corporation of the Year Award for its approach to global diversity and inclusion, driven through an integrated framework of workforce, workplace, marketplace and leadership. In a companywide initiative BNY Mellon employees around the globe play a role in the engagement, participation leadership, training and advocacy of diversity and inclusion programs at every level. The company’s supplier development program is credited with helping diverse suppliers build capacity to grow their business operations.

John Basile, first vice president of diversity and inclusion, Fidelity Investments, was named Corporate Leader of the Year. In his role, Basile includes diversity in all aspects of the workplace environment. He is a founding member of Fidelity Pride, the inaugural employee resource group at Fidelity Investments, and has encouraged the formation of the group throughout the U.S. and overseas. He drives cross-segment diversity initiatives, including programs to attract, retain and develop women in the information technology field.

• Bank of America’s LGBT Pride Ally Program, launched in June 2013, won the Program or Initiative of the Year Award. The Ally Program is an educational and visibility program designed to help foster and create an inclusive culture at the company. A day-to-day focus on interactions between colleagues across the bank enables LGBT colleagues to be more comfortable, effective and committed to Bank of America. Nearly 2,300 employees have signed up to be allies in the program globally, spanning 44 states and 26 countries.