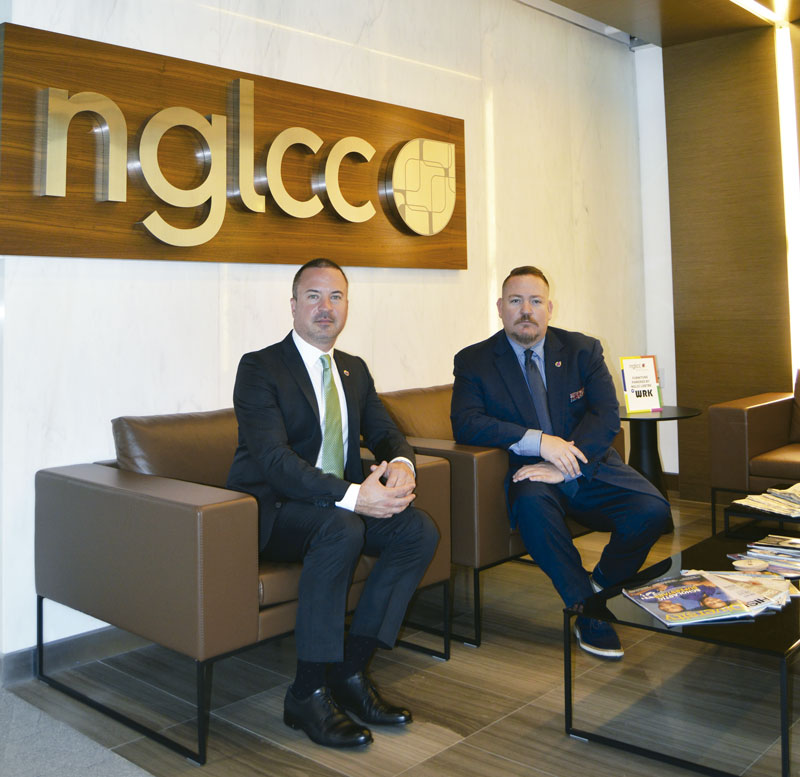 National Gay and Lesbian Chamber of Commerce is known worldwide as “the business voice of the LGBTQ community” — not just for the certification and promotion of LGBTQ small business interests, but also for its advocacy on national and global issues. The organization articulates “the business case” for pro-inclusion policies and reminds leaders that harming the gay community’s safety, personally and economically, will have massive repercussions.
Thankfully, more national, state, city, business and corporate leaders across America are proactively fighting for LGBTQ inclusion and nondiscrimination.
“And now here we are, nearly twenty years later, with over 200 corporate partners, serving as the business voice of America’s 1.4 million LGBTQ businesses owners and the $1.7 trillion dollars they add to the economy each year— and we are just getting started,” said Chance Mitchell, Co-founder and CEO of NGLCC.

The Beginning
“Back in 2002 we realized that too few government leaders and corporate executives had considered the economic equality of LGBTQ people or the impact economics could have on the future of the equality movement. The LGBTQ community was finally being fairly represented on TV and in some halls of power,” Mitchell said. “But we still needed a way to showcase that LGBTQ people were a vital part of America as business owners, employers, taxpayers, providers of healthcare. LGBTQ businesses owners were, and are, an essential part of the small business engine that makes the U.S. economy run and therefore deserved an equal place at the table. So with a few forward-thinking corporate partners, first IBM and then followed by others, and a small network of LGBTQ business owners willing to tell their story, the NGLCC was born.”

Business Landscape
Word began to spread in 2002 about the NGLCC very quickly, thanks to national media outlets recognizing the previously underreported strength and promise of the LGBTQ business community.
The positive responses the founders, Justin Nelson and Mitchell, received when they began certifying LGBTQ Business Enterprises in 2004 — something many thought would never be possible or accepted — showed them they we were on the right track.
“In the little more than a decade since, we have certified nearly one thousand businesses and have seen our certification welcomed by over one-third of the Fortune 500. The spikes in certification and influence of the LGBTQ business community and our business allies parallels the milestones in LGBTQ community advancement,” said Nelson, president of the NGLCC.
These advancements proved what they and partners at NGLCC have always believed: that economic visibility and social visibility go hand in hand as they march toward equality and opportunity for all.
NGLCC’s goals will only be further strengthened as more corporations intentionally stand with the community by including LGBTQ businesses in their daily operations and supply chains.
“Today we work with over 250 companies and government agencies that want to find LGBTQ suppliers” Nelson said. “The recent changes to the Human Rights Campaign Corporate Equality Index requiring LGBTQ business contracting means that over 500 companies will now be looking to work with LGBTQ suppliers if they are to earn and keep their 100 percent.”
In 2018 and early 2019, NGLCC lobbied for and won the inclusion of LGBTQBEs in Orlando, FL; Nashville, TN; Baltimore, MD; Jersey City, NJ; and Hoboken, NJ, while also advancing statewide bills in New York and New Jersey. Currently, California, Massachusetts, and Pennsylvania also include certified LGBTQ-owned businesses, along with major cities like Seattle, Newark, Columbus, and Philadelphia.

A Seat at the Table
In the United States, LGBTQ-owned businesses are creating tens of thousands of jobs, and adding almost two trillion to the economy, much of that due to inclusion in corporate supply chains. In particular, the inclusion of LGBTQ-, disability-, and veteran-owned businesses into the Billion Dollar Roundtable reflects the national best practice in supplier diversity.
“We’re proud to see our businesses included in the criteria that rewards corporate excellence in creating new opportunities for diverse-owned businesses to thrive. To date, the Billion Dollar Roundtable reports at least $80 billion in spend with diverse-owned businesses,” Nelson said. “That number is expected to continue climbing as corporations are encouraged and now incentivized to work with LGBTQ-, disability-, and veteran-owned firms.”

Political Climate
At a time when visibility has never mattered more for the LGBTQ community, leaders are emerging across the community to step up, throw their hat in the ring, and, in many more instances than ever before, win political races.
“If this government truly wants our economy to grow, they must concern themselves with the health of our businesses, not our bedrooms and bathrooms. NGLCC and its partners encourage our constituents and stakeholders to publicly fight these policies and ensure America is safe and open for business for all,” Nelson said. “Laws allowing religious exemptions to discriminate, and other anti-LGBTQ and diversity policies, are a desperate and callous backlash against the success of marriage equality and other advances for the LGBTQ community. Public opinion echoes the court’s sentiment that equality is essential for American progress, particularly in business.”

Continuing Success
The first years of NGLCC was dedicated to planting a flag in the ground and saying that LGBTQ businesses must have a place at the table.
“We’ve done that, and our businesses are thriving. The years ahead will be focused entirely on gaining more ground for our community to thrive economically— in America and around the globe,” Mitchell said. “There is a business case to be made for nearly every issue facing every community, and whether it’s social advancement or health care or tax reform, the NGLCC plans to continue to ensure sure the economic health of the LGBTQ community is considered.”
Equality can be taken away by shifts in political power, but equity is the economic and social power that helps ensure social gains are permanently defended.
“Every single day our community is building equity by opening new local businesses in small towns, and by expanding operations of larger LGBTQ-owned companies to countries around the world,” Mitchell said. “It’s up to all of us to ensure the same kinds of opportunities American LGBTQ entrepreneurs are finding make their way to LGBTQI people around the world who need them most. It’s time to double down on helping every business of every size in every country get ahead.”
The NGLCC has spent the last seventeen years helping more LGBTQ Americans gain access to the American Dream than ever had it before. And yet, the leaders of the NGLCC feel they barely scratched the surface of what can be accomplished. As more corporations and government agencies intentionally include certified LGBTQBEs, more opportunities to create jobs and innovate industries will spring up in every state in the country.
“As we see every day with our LGBTQ business owners at the NGLCC, strength of character, a commitment to a more inclusive country and economy, and a calling to be a role model for the next generation inspires them daily to prove that being out and being successful, in business or in public service, never need to be mutually exclusive again.”