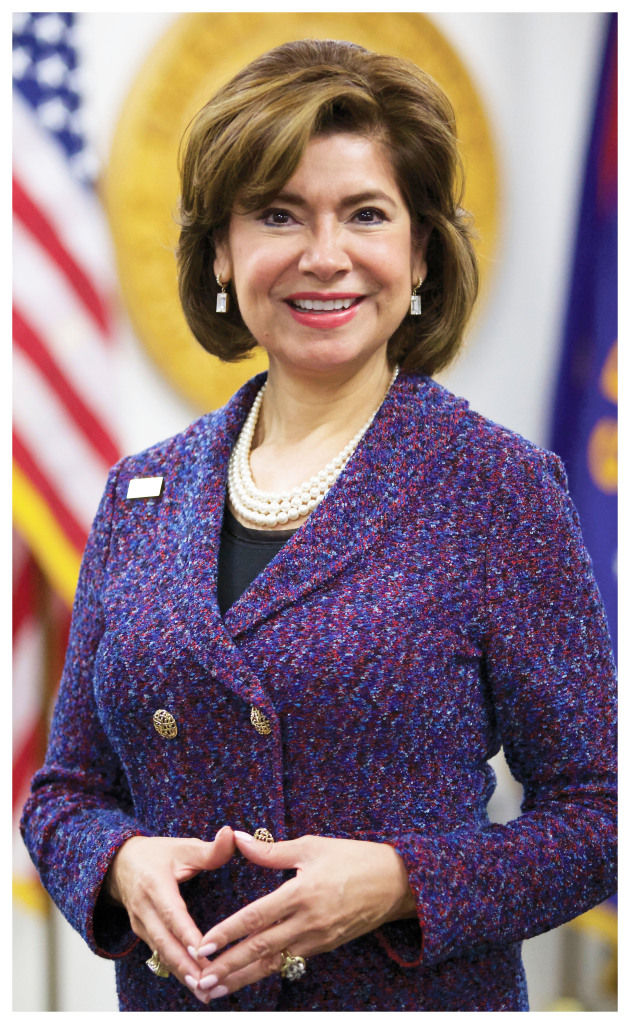 The U.S. Small Business Administration is on a mission to modernize the organization and let small business owners know that they are standing by to provide support at every stage, from startup to expansion to globalization. Recently appointed Administrator Maria Contreras-Sweet is leading the charge, reaching out to lesbian, gay, bisexual and transgender business enterprises and other diverse suppliers across the nation with a dynamic message of inclusion and support.

Born in Guadalajara, Mexico, she immigrated to the United States at the age of 5. Unable to speak a word of English upon arriving in this country, she was eventually able to start three businesses and is now a member of the U.S. Cabinet.

“In no other country in the world is my story possible,” Contreras-Sweet said.

While at Westinghouse Electric Corp., Contreras-Sweet became one of the leading corporate negotiators for the creation of the Beverage Container Recycling and Litter Reduction Act of 1986, which introduced the California Redemption Value for bottles and the mass expansion of recycling in the state.

Striking out on her own, she started the Contreras-Sweet Co., a marketing and research consulting firm with a specialization in the Latino market. Her clients included The Coca-Cola Co., Pacific Gas and Electric Co., Hoechst AG, The Walt Disney Co. and Sempra Energy.

In 1999, Contreras-Sweet was tapped by California Governor Gray Davis to be secretary of the Business, Transportation and Housing Agency, becoming the first Latina to be named a state or national cabinet secretary in U.S. history. During her five-year term, she was the longest serving BTHA secretary, overseeing 44,000 employees, a $14 billion budget and 14 state departments.

After leaving public office, Contreras-Sweet joined with Edward P. Roski to form Fortius Holdings LLC, a private venture capital firm that sought to invest in small businesses with an emphasis on Latino- and women-owned businesses.

President Obama reached out to Contreras-Sweet in 2014, asking her to become administrator of the Small Business Administration, a role she accepted with enthusiasm. She was confirmed in March and assumed office in April 2014, bringing her experience in both the public and private sectors to the SBA.

Contreras-Sweet immediately set about framing her vision of the SBA as smart, bold and accessible, calling for a proactive approach to engaging underserved communities and showing them the wide variety of services the SBA has to offer small business owners.

Coming into office, Contreras-Sweet recognized that the SBA needed to be modernized in order to be effective, efficient and successful.

“The federal government is the largest buyer of goods and services in the world,” she said, “and we want LGBT entrepreneurs to be able to grow their businesses through procurement.”

To that end, the SBA co-sponsored a matchmaking event with the National Gay & Lesbian Chamber of Commerce in November, providing a venue for LGBT owners to meet with buyers and prime contractors who can help them expand.

The two organizations will team up again in 2015, when SBA district offices will support NGLCC-certified businesses across the country with the educational resources and programs to help spur business growth.

“The idea is to encourage the LGBT business community to get plugged into all that the SBA has to offer while recognizing the value of NGLCC certification,” said David Perry, director, SBA National LGBT Outreach.

“It is important to me that we embrace diversity in every respect,” Contreras-Sweet said. “Our policies are helping people get access to capital and into counseling and into contract opportunities.”

Since accepting leadership of the SBA, she has enacted significant changes in the area of access to capital. With her background in banking and knowledge of the underwriting process and financial institutions, she implemented a predictive credit-scoring model to facilitate the advancement of smaller loans and ensure more equitable access to capital.

“This [model] allows banks to process loans much faster and applicants to process them much faster, so more people are getting through,” Contreras-Sweet said.

The SBA has also changed how the organization, which acts as a guarantor, handles underwriting. For instance, it has implemented a no-fee policy for loans under $150,000.

These changes have been put in place with the goal of increasing access to capital for underserved communities. According to the Urban Institute, women and minorities are three to five times more likely to receive SBA-backed loans than traditional bank loans to start or grow their businesses.

“We are not here to compete with banks. Where banks are lending, then the market should do its work,” Contreras-Sweet said. “But, where there is a gap — as there often is in underserved communities — the SBA can come in and provide its suite of services. Some people have a rich uncle who will open the doors or serve as a guarantor. For our communities, we have Uncle Sam.”

While the focus of the U.S. Small Business Administration remains providing the support and resources to help small businesses flourish, Administrator Maria Contreras-Sweet suggested the agency’s acronym describes the way she wants entrepreneurs to view its customer service.

S stands for “Smart” and means the agency is using new technology to recruit hundreds of new banks into the SBA lending network and is transforming its customer service, so loan decisions that once took weeks are now being made in a matter of minutes.

B stands for “Bold” and means the agency is doubling down on its efforts to help small businesses secure government contracts, corporate contracts and international export contracts. Ninety-five percent of the world’s consumers live outside U.S. borders, and the SBA is focused on helping more small businesses sell to them.

A stands for “Accessible” and means the agency is created to be as diverse as the entrepreneurs it serves. The face of entrepreneurship is changing in America, and more of those faces belong to women, veterans, seniors and minorities. So, the SBA is focused on increasing access to credit and counseling to support America’s underserved small businesses.