“My management philosophy comes down to what I call the four Ps,” he said. “The first P is always people. Then, it’s planning, performance and partnerships.”

Putting people first is what Nationwide does too, committing significant resources to create an empowering workplace, repeatedly putting the company on multiple Best Places to Work lists and earning Nationwide a 100 percent score on the Human Rights Campaign’s Corporate Equality Index for 11 consecutive years, as well as recent recognition as one of the most transgender-inclusive companies in the U.S. Nationwide is also an Affinity Inc Magazine Top Corp for LGBT Economic Empowerment.

Witnessing the power of insurance

Walker interviewed with Nationwide straight out of college, after his hometown in Iowa was decimated by an F4 tornado in 1979. In the aftermath, he saw firsthand how insurance plays a role in rebuilding — and how devastating it is for those without coverage.

“I think at the time, people typically thought that insurance was something that you bought because you had to; it didn’t serve any real purpose,” he said. “I saw that my hometown was rebuilt by insurance companies and learned about the noble purpose that insurance serves.”

As the people in his hometown rebuilt their lives, Walker embarked on a career with Nationwide and will celebrate 30 years with the company this January. Over the years, he has continued to put people first — both his associates in the workplace and Nationwide’s members.

Leading by example, Walker wants to empower all Nationwiders, as he calls them, to be responsible for diversity at all levels of the company.

“One of the things we are really proud of is the fact that everybody is accountable for diversity and inclusion,” he said. “We value our associates’ unique perspectives and talents. It has become a part of the culture that makes up Nationwide; it is intentional and it is making a difference.”

Over the past two years, Nationwide welcomed members of the National Gay & Lesbian Chamber of Commerce, Women’s Business Enterprise National Council and other diverse business organizations to the company’s headquarters where they met with Nationwide’s executive leaders to discuss goals and strengthen their strategic partnerships.

“We have made deliberate business decisions to partner with nationally certifying bodies like NGLCC and WBENC, in order to give diverse suppliers greater access to opportunities within Nationwide,” Walker said. “I believe it is really important to do so, in part because it has a positive impact on the community.”

Recruiting the best and the brightest

The commitment to diversity extends to the workforce itself, as Nationwide continues to seek out the best and brightest talent for positions at all levels of the company from a variety of prospective employee pools. Under Walker’s leadership, Nationwide financial associates participate in the National Society of Hispanic MBAs, Reaching Out MBA Inc. and the National Black MBA Association Inc. annual conferences.

“I think there is an unbelievable group of talent to be brought in from all of these diverse recruiting areas,” he said.

Not only does Nationwide actively recruit individuals with diverse backgrounds for full-time and executive-level positions, but the organization has built a robust internship program with an eye toward finding up-and-coming talent from its partnerships with Black Enterprise, Latina Style Inc. and the network of schools in the Central Intercollegiate Athletic Association, to name a few.

“We had 34 interns from 25 universities this summer, and that intern class was 59 percent diverse,” Walker said. “We are pretty proud of that. We are making a bigger impact because the folks that come and work with us at our summer internship programs are, hopefully, future full-time employees of Nationwide and all the businesses that we have out there.” 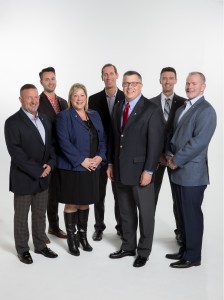 Six years ago, Walker asked to become the executive sponsor of Nationwide’s PRIDE associate resource group, one of 19 ARGs in the company, as part of his personal commitment to equality. He cites his own family as the reason for his desire to be more involved.

“I have two nieces who I am really, really proud of,” he said. “They are unique in that they have two moms, who I am also proud of. I have witnessed the challenges of living authentically within my own family. Because of that [experience], I have a passion around Pride and asked if I could be the executive sponsor for the group.”

Walker is proud of what the Pride ARG has accomplished within the company and the broader community. Nationwide is actively involved in pride parades around the country, including in Columbus, Ohio, where the company is headquartered.

Internally, the group advises various departments on relevant items, such as how to accurately represent lesbian, gay, bisexual and transgender people in Nationwide’s mainstream advertising. The Pride ARG also collaborates with human resources to educate and represent the needs of the LGBT community, developing a mentoring program and consulting on policy changes.

“The LGBT community has ever-evolving needs,” Walker said. “Working with the talented members and leaders in our Pride ARG, we have been able to identify and implement some unique solutions, such as full spousal benefits for Nationwide associates and domestic partner benefit programs. Nationwide has always been supportive of our families. We are really proud of that.”

ARGs at Nationwide also play a business role. During the past year, ARGs were responsible for generating more than 7,000 customer leads; the Pride ARG brought in nearly 2,000 of those leads.

Walker’s team is currently focused on continuously updating Nationwide’s agents and advisors on  innovative solutions for its members, such as how marriage equality impacts Social Security filing decisions and tax status, among other changes.

“As the landscape continues to evolve and as the Supreme Court’s decision really unfolds, we are paying close attention to changes in the law,” he said. “These are the things that have real impact on financial decisions that our members — as well as our associates — make, and it’s our responsibility to have a thorough understanding of all the benefits that are starting to emerge.”

From associate benefits to the supply chain to member services, embedding diversity into the fabric of Nationwide means everyone within the organization is responsible for creating a supportive, inclusive environment. As Walker said, diversity is everyone’s business at Nationwide.