Marriott International Inc. has a lot to celebrate this year: continual increasing commitment to diversity and inclusion and full support of the contributions of all of its associates, including lesbian, gay, bisexual and transgender associates; suppliers; guests; and the communities they serve. From a rise in the number of diverse- and women-owned hotels to exceeding diverse spending goals to its #LoveTravels campaign, Marriott continues to stand at the forefront of equality.

25+ years of diversity and inclusion programs

In a report issued in October 2015, Marriott International recognized the 25th anniversary of its diversity and inclusion program, though the tradition of inclusion goes back decades. Formally launched in 1990, the program’s track record of success is extensive. In the LGBT space alone, the results are impressive: The company consistently scores 100 percent on the Human Rights Campaign Corporate Equality Index, is a prominent member of the National Gay & Lesbian Chamber of Commerce and was among the first hotel leaders to offer domestic partner benefits, beginning in 1999.

Marriott International was named the 2014 NGLCC Corporation of the Year and a 2015 Affinity Inc Magazine Top Corporation for LGBT Economic Empowerment. In addition, it received the 2015 PFLAG Straight for Equality in the Workplace Award. The global lodging giant hosted the 2015 Seventh Annual PFLAG National Straight for Equality Gala at the New York Marriott Marquis and the 2015 NGLCC International Business & Leadership Conference at Marriott Harbor Beach Resort & Spa in Fort Lauderdale, Florida.

LGBT economic empowerment depends on each company doing what it can to make a difference for its bottom line and the communities it serves.

After exceeding its 2014 goal — spending more than $541 million with diverse suppliers globally — Marriott International continues to raise the bar in engaging and spending with global diverse-owned businesses.

“We recognize that being a major global company presents an opportunity for us to have a significant impact, creating opportunities for many talented, diverse-owned businesses in the global supply chain,” said Dominica Groom, director, global supplier diversity. “Our commitment is focused on five diverse groups: the LGBT community, people with disabilities, the veteran community, the minority community and women-owned businesses. We ended the year [2014] by spending over half a billion dollars with diverse vendors. We’re really proud of that, and we continue to elevate and escalate those efforts.”

Marriott International’s strategy of using available resources to embrace and empower diversity and inclusion throughout the organization, along with working together to exceed its targets, sets a benchmark for those striving to use their own resources effectively.

“When we look at our support in the LGBT space, we take a holistic view,” said Denise Naguib, vice president, sustainability and supplier diversity. “It’s not just about suppliers; it’s not just about the customers. It’s all inclusive. We work with many of our peers around the organization to make sure that our LGBT efforts are cohesive and clear and heading in the right direction.”

Success comes from within, and Marriott International has an infrastructure that supports, promotes and embraces inclusiveness from the top down.  This commitment for diversity and inclusion begins in the C-suite — President and CEO Arne Sorenson is an advocate for equality — and continues through all associate levels. The organization’s LGBT and ally associate network, ONE, is an example of this commitment.

“Launched in 2010, ONE is a group of associates who are part of the conversation and can help support company priorities,” ONE Marriott Chairperson Bruce Rohr explained. “ONE has conversations with leadership about what is important not only to associates, but [also] to our customers out there in the business space.”

Apoorva Gandhi, vice president, multicultural affairs, said, “It readily brings value back to the company by working with LGBT-certified businesses and exposing them to the Marriott procurement opportunities.”

In June 2014, Marriott International launched #LoveTravels, a social media and marketing campaign that conveys the company’s commitment to make everyone feel comfortable being who they are, everywhere they travel.

The campaign kicked off with building wraps at five hotels in Washington, D.C.; a series of print ads in lesbian, gay, bisexual and transgender media; an online portrait gallery; and display ads in cities throughout the U.S. featuring portraits of Jason Collins, the National Basketball Association’s first out player; Geena Rocero, a transgender supermodel and social advocate; and Talisha Padgett-Matthews, a Marriott International associate.

This year, on the eve of the Supreme Court’s historic ruling on marriage equality, Marriott International sponsored the Capital Pride Parade in Washington, D.C., and hosted a pop-up wedding on its parade float. As part of the #LoveTravels campaign, TV personality Ross Mathews officiated the marriage ceremony between George Carrancho and Sean Franklin, a couple of nearly 10 years, who met in their home state of Texas and now reside in New York. Gandhi emphasized that Marriott not only celebrated same-sex marriage, but also spoke up for it as one of America’s leading corporations to sign the historic amicus “People’s Brief” to the U.S. Supreme Court advocating marriage equality.

The very popular #LoveTravels campaign was launched highlighting LGBT couples and families. But, then it showcased new campaigns among other communities, including African-American and Latino couples. The multicultural mosaic is one significant way that Marriott tries to include and to speak to everyone.

Building on the strength of its diversity and inclusion strategy, Marriott International continues to look for ways to recruit and advance a diverse employee base, as well as actively develop a diverse owner, guest and supplier base. As the company expands globally, these efforts also extend to global markets, where Marriott works with local communities to create opportunities and value differences.

Marriott is enthusiastic about its global progress. For example, Gandhi has shared Marriott’s lesbian gay, bisexual and transgender holistic strategy and practices with various audiences globally. “We try to do all we can to give our partners and properties the relevant experience and business tools needed to engage with the LGBT community,” he said. “Most of all, we try to ensure that all our associates and guests feel welcome everywhere they travel.” 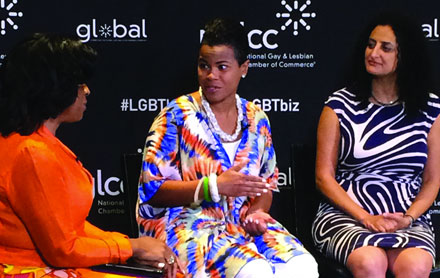