A Path to Acceptance
Latino Business Leader Pays It Forward, Never Looking Back
By Jennifer Mills 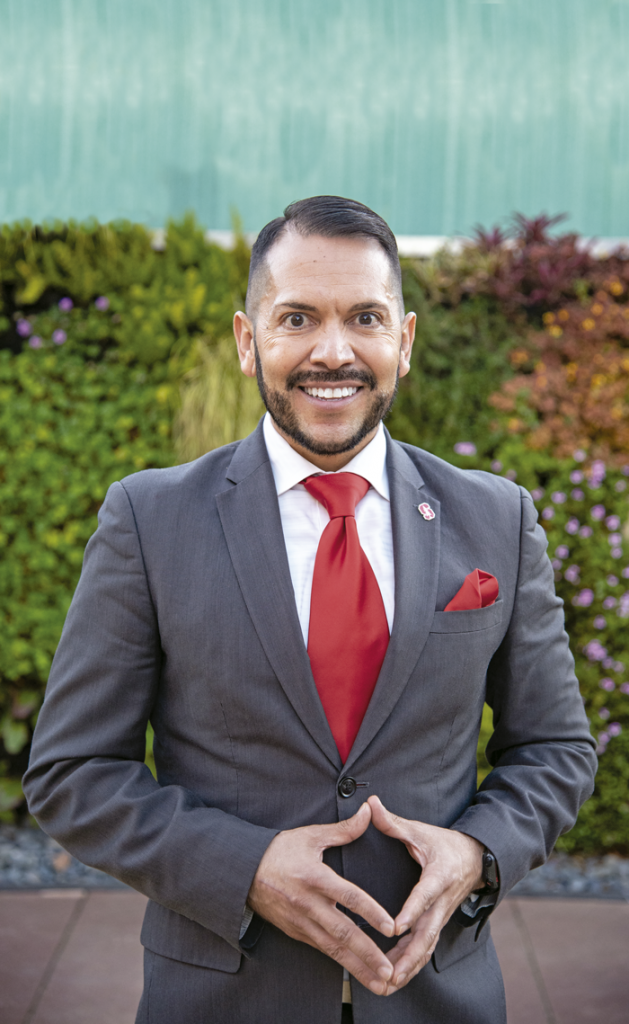 Mark Madrid is many things. Fighter. Servant. Champion.
He has always blazed his own path, fought for every inch of progress gained, for him and for others—many others. That’s because Madrid doesn’t fight merely for himself. He fights for the minority student wishing to go to college, the gay accountant looking for his own identity, and the Latino entrepreneur learning how to succeed in a competitive world.
The son of migrant workers had big plans when he left his small Texas hometown of Friona, but as the current CEO of the Latino Business Action Network (LBAN), a nonprofit collaborating with Stanford University Graduate School of Business to scale Latino-owned businesses, Madrid says he’s just getting started.
“There’s a lot of work that needs to be done in terms of empowerment, especially in this divisive time that we’re in,” Madrid says. “It’s time for those of us who are in a position to, to step up in a big way—in our own way. I think it’s important to be authentic and to realize what our lanes are. I hope I’m creating one in this space.”
After 13 and a half years in banking, starting on Wall Street with JP Morgan and ending abruptly in Houston due to the Great Recession, Madrid charted a course for a life of service, one he felt he was always meant to follow. Volunteering at the Houston Hispanic Chamber of Commerce led to becoming its first-ever COO. That success sparked Madrid to become President and CEO of the Greater Austin Hispanic Chamber of Commerce, an organization in which he led a transformation before he was soon courted to lead the Latino Business Action Network.

Fighter
With unbridled optimism and a seemingly effortless ability to motivate and inspire, Madrid’s passion for advocacy comes from a pure place, but also one with as much adversity as reward. As a “Hispanic kid” in a predominantly white community in the Texas Panhandle, he experienced prejudice, though he credits the community for his moral fiber and spirituality, not to mention his father, for his entrepreneurial spirit.
Still, Madrid decided education was his ticket out of the small town, and it wasn’t long before he was winning Universal Interscholastic League competitions and graduating as valedictorian of his class. He earned a full scholarship to the University of Texas at Austin in accounting and, still a “die-hard longhorn fan,” was recently nominated for the university’s Distinguished Alumnus Award.
Graduating with honors, Madrid snagged his first real-world job with JP Morgan on Wall Street, as an internal management consultant.
“Although I didn’t have a mentor, I groomed myself to be a risk-taker,” he says. “I told myself that managed risk could mean higher reward.”
This proves to be a theme throughout Madrid’s life and career. He also attributes his resilience and composure under pressure to a summer job selling books door to door, which taught him to be “fiercely disciplined” and to embrace solitude.

Servant
Madrid left Wall Street to be closer to his family in Texas, but when his next banking opportunity in Houston fell victim to the economy in 2008, he took it as a sign to follow his deeper purpose.
“I go back to how I cultivated that mindset of managed risk. I wanted to do something with a business mind, but I knew I had to tap into that servant heart.”
Madrid had found a strong mentor in Sheryl Heffernan, who was National Sales Director while he worked at NYCB Mortgage Company. It wasn’t long before he had found another mentor in Dr. Laura Murillo, the “dynamic” CEO of the Houston Hispanic Chamber of Commerce. Beginning as a volunteer, Madrid soared to the top of the organization, becoming second in command. He also became the inaugural U.S. Hispanic Chamber of Commerce fellow for the Master in Nonprofit Administration at the University of Notre Dame, Mendoza College of Business.
A natural conduit for change, Madrid brought that gift to the Greater Austin Hispanic Chamber of Commerce, which contributed to the organization winning the 2015 United States Hispanic Chamber of the Year award. He brings it to everything he does, including his current role as CEO of Latino Business Action Network. LBAN’s vision is to strengthen the U.S. by improving the lives of Latinos through entrepreneurship education and a support network.
“I’ve been here over two years now, and our goal is to double the number of $10+ million, $100+ million, $1+ billion Latino-owned businesses in the U.S. by 2025,” Madrid says.
LBAN collaborates with Stanford University Graduate School of Business to advocate for the Stanford Latino Entrepreneurship Initiative, and one of the collaboration’s priorities is to offer an immersive seven-week scaling program for the top 2-3 percent revenue-producing Latinx entrepreneurs in the U.S.
“We are shaping a narrative so that all Americans think Latinos are an asset, not only our own community.”

Champion
Throughout Madrid’s life, there was always a low hum, just below the skin, that ever-present truth of being gay. He didn’t publicly come out until his 40s and readily acknowledges being gay was a taboo subject in his Southern community, at odds with the machismo of his family’s Latin culture as well as in the pulpit. His story of coming to terms has been “very difficult and very traumatic.”
“My parents and my sisters have been ultimately supportive and showered me with unconditional love even when they didn’t understand,” Madrid says. “Love is love. I give them a lot of credit and I admire them for going on this journey.”
He came out in a big way in 2016 at the Greater Austin Hispanic Chamber of Commerce’s biggest event of the year. When thanking his family from stage in front of 900 people, he blurted out, “and I thank my love and partner, Dan.” He repeated those words again and said, “there I said it.” The crowd recognized the moment and started clapping, giving him a standing ovation.
“From that point forward, I thought, this is a platform, and the lane I want to be in,” he says.
Victoria M. DeFrancesco Soto, Director of Civic Engagement and Lecturer at UT and a close friend, was present the night of Madrid’s public announcement.
“He is a gay Latino Christian business leader,” Soto says. “For the longest time he had all of these identities that he was juggling in parallel. And it wasn’t until recently that he has brought them all together and reached a new level of self-recognition and self-worth. I’ve really seen him come into his own. He’s been able to advocate for all of those distinct groups and the intersections of those groups.”
Madrid has worked to make a diverse space for LGBTQ through the Latino Business Action Network. “I’ve got to use this platform to find scale LGBTQ companies across the country, because they are a part of this,” Madrid says. “Right now, out of the 432 alums, I’m thinking only three of us are LGBTQ, and that’s not going to work.”
Starting with supplier diversity programs that honor LGBTQ certification, Madrid wants to recruit scaled Latinx LGBTQ companies as well as those owned by veterans to come through the Stanford program to be part of a bigger ecosystem of moving the Latino economic agenda forward, “which is an American economic imperative.”
Soto believes this servant, fighter, champion is beginning a new chapter of his life and will continue to raise the bar for himself and his communities.
“Mark keeps writing chapters in his biography, and keeps getting more and more interesting and exciting,” Soto says. “He’s not done yet, and he loves bringing other people along. Some people who have ‘made it’ don’t look back. But he is the complete polar opposite of that.” 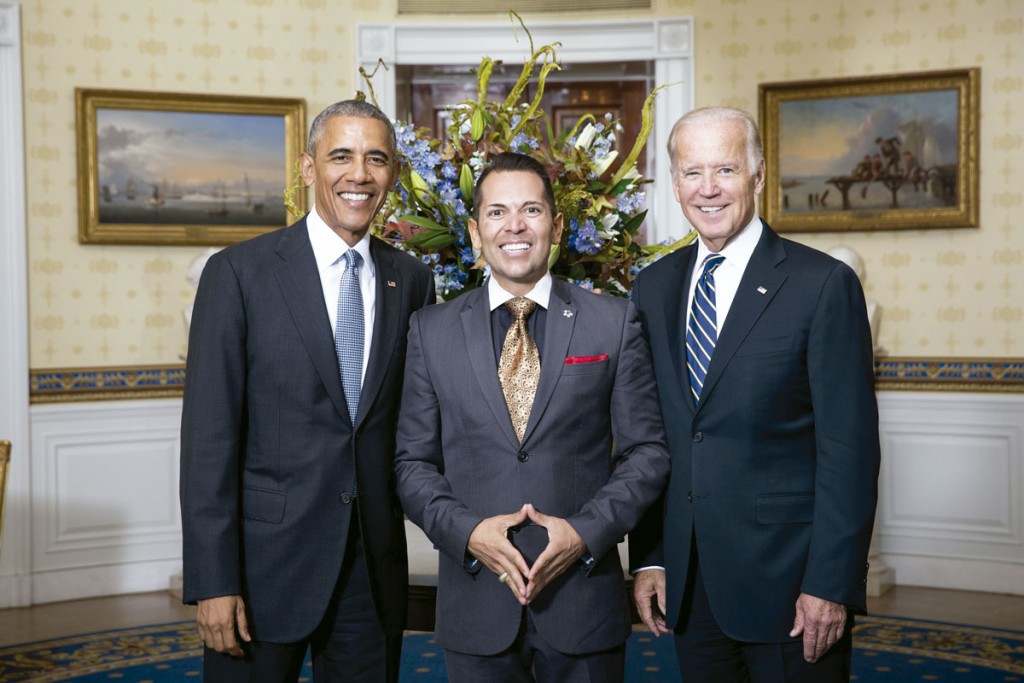