Knowledge is Power — Reaching Out MBA 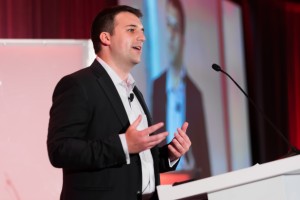 Matt Kidd, executive director of Reaching Out MBA, or ROMBA, is on a mission to educate, inspire and connect LGBT MBAs and develop the next era of leaders who live authentically at all levels of business.

“We need more people like Trevor Burgess of C1 Financial who really was out his entire career, and now that his company is public, he just happens to be an out CEO,” he said. “I think we need more people like that. I would love to see people who feel comfortable being out in their roles and then getting into those positions rather than coming out when they get into those positions.”

Best known for its annual conference (see sidebar), in recent years ROMBA has grown into an organization offering a full slate of support and services for lesbian, gay, bisexual and transgender MBAs year-round.

Kidd was named executive director of ROMBA in 2013, as part of the transition from a volunteer-led conference to a fully staffed, full-service organization. He has been involved in ROMBA for seven years as both a student leader and a board member. But, when the time came to expand the organization and take it in a new direction, he realized that he wanted to lead the charge.

“If you look at my background — which deals a lot with media, technology and entrepreneurship — the thread connecting everything is that I am somebody who likes to come into organizations and launch new products,” he said. “Right now, we are launching new products and bringing them to the marketplace. The marketplace is telling us whether it likes it or not. We figure out how we can make adjustments, and then we move on. I am really excited to be in this position, in this phase where we are growing the organization into something larger than the conference.”

The new products Kidd referred to are part of ROMBA’s expansion into an organization that serves current, future and graduate LGBT MBAs. At its core is the current MBA student who is served by the Annual ROMBA Conference through one of the 50+ on-campus ROMBA affiliates.

“We bring the clubs together on a monthly basis through organized calls or a summit, so that they are talking to one another, learning best practices,” he said. “We help advise them, and we help them put together some of their own content as well.”

This year ROMBA expanded beyond North America, staging its first international summit in Brazil, geared toward MBA students as well as business students in general.

Alongside the annual LGBT admission summit held in conjunction with the ROMBA Conference, this year the organization launched a fellowship program to recruit students that was coordinated with 17 colleges and universities.

“Essentially these schools are each setting aside one or two spots for lesbian, gay, bisexual and transgender individuals, and with those spots, the schools are awarding a minimum $10,000 per year in scholarships,” Kidd said. “We then set them up with mentors, leadership opportunities and some leadership training opportunities throughout their two-year time in business school.”

The fellowship program was created with the intent of increasing the number of out lesbian, gay, bisexual and transgender people in MBA schools and in business in general. According to annual surveys conducted by ROMBA, business schools have about 1.5 to 3 percent out LGBT individuals in their classes, compared to roughly 8 percent of the overall student population. This underrepresentation is of concern socially and from an innovation perspective.

“Schools want to bring in people who are out because they feel like it is a good educational opportunity, particularly when you are interacting with so many international students who may not have experienced as much openness as we have in the U.S.,” Kidd said. “In addition, a lot of companies are specifically looking for lesbian, gay, bisexual and transgender talent right now, and so there is actually a benefit — to some extent — by being out as LGBT. It opens different avenues for these students to recruit with companies that they otherwise might not have, and schools are recognizing this [opportunity].”An additional inequity is the underrepresentation of lesbian, bisexual and transgender women in business schools and in business overall, he said. To that end, ROMBA launched a conference series called Queer Women in Business, holding the first events this past spring. These conferences are geared toward LBT women in business in general — not just MBAs — with the aim of creating a physical LBT business community.

“Through our surveys, we found that LBT women feel like there is not a visible community for them both in business school and in business in general,” Kidd said. “I think that’s true, so we decided to help build that community.”

He is driven by the desire to encourage lesbian, gay, bisexual and transgender individuals to be their authentic selves as early as possible in their academic and professional lives. ROMBA wants to develop the next era of out LGBT leaders who go up the ladder as out LGBT individuals once they reach the senior executive level.

With organizations like Out Now publishing data showing the cost of unhappy, closeted employees, ROMBA is working with school administrators and club leaders to create an environment where lesbian, gay, bisexual and transgender students feel that they can be their authentic selves, such as the fellowship opportunity and other support systems.

Kidd said it is also important for LGBT MBAs to be out from the beginning of the application process. Many schools are actively recruiting lesbian, gay, bisexual and transgender individuals, and being out can open doors that are not open to others.

“I think we are at the point in society where there are actually tangible benefits at multiple levels of being out while you are going to business school and while you are in the workplace,” he said. “I think about the fellowship, for example, that is a scholarship program that really you can access by saying, ‘Hey, I’m out as an LGBT individual,’ or ‘I’m out as a really active ally.’ Maybe rather than competing with your 800 classmates at a certain school, you might be competing against 70 different lesbian, gay, bisexual and transgender people from different schools across the country by going through a different recruiting door.”

Living authentically is at the core of the new mission for ROMBA, Kidd said.

The 18th Annual ROMBA LGBT MBA & Business Graduate Conference was held Oct. 8-10 in Chicago, Illinois. A key event for LGBT MBAs and recruiters, this year’s event featured the opportunity to network and connect as well as go beyond the “standard, basic career panel” discussions, said Matt Kidd, executive director of Reaching Out MBA  or ROMBA.

Recruiting and networking opportunities were another highlight of the conference, allowing attendees to present their authentic selves to recruiters and build their networks.

“The ROMBA Conference is a great opportunity to recruit and meet companies in person, whether you’re looking for internships or full-time hire,” Kidd said. “It’s also a place for people to build their networks. I have found over time that my LGBT MBA network has been more beneficial to me in a lot of ways than my school network.”