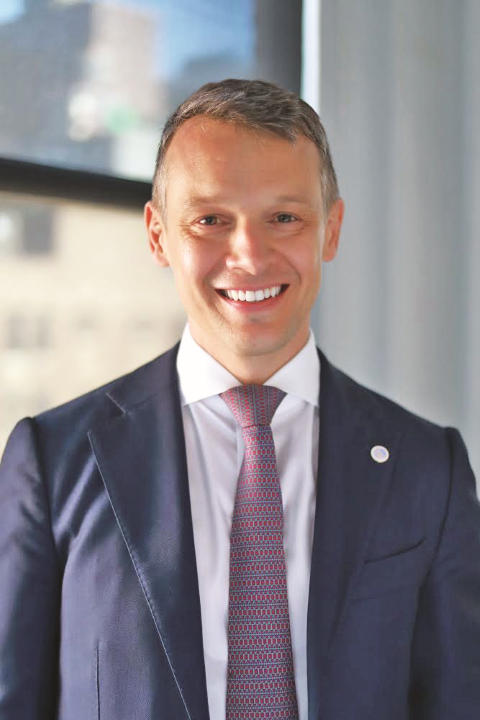 At about Noon on July 13, 2018 Fabrice Houdart, Human Rights Officer at United Nations, was just getting back from speaking to the delegation of the Presbyterian Ministry at the United Nations. They had seminaries in attendance. On this particular day, the United Nations was finalizing its global compact for migration, which was the subject of the talk.

For Houdart, migration is a topic that touches on many aspects. For one, you have migrants who leave their countries because they have too due to war, famine, racial, sexual or gender discrimination, better economic opportunities, etc.

“A lot of people believe that migration should be split between voluntary and involuntary migration. But really, when it comes down to it, there is not such a thing as voluntary migration. Migration is pretty much always a painful story, because you have to leave your community; you have to leave your family. If you speak to a migrant from Africa that crossed over to Europe through Libya, it’s a horrendous journey. It can be deadly. This idea that anybody would do that voluntarily is ridiculous. Of course, if you’re having to endeavor such a dangerous journey, it means you have no choice.”

Forced migration is not always about leaving a war-torn country, though. Sometimes it is an LGBTI person leaving for a more urban-progressive setting. Even though it’s extremely difficult to measure, Houdart feels it is obvious that as a country we are going to face an increased migration by people that have non-conforming sexual orientation or gender identity.

“I have been writing a lot about the fact that the gap between the lives of the Lesbian, Gay, Bisexual, Transgender/Transsexual and Intersexed (LGBTI) people in the more tolerant places like urban areas, in the United States, or parts of Europe, and their experience in the least tolerant place is unsustainable. Some people have no choice but to migrate or to experience despair, because, in a connected world, they know that the only thing that stands between them and the life of opportunity and dignity is a plane ticket.”

Houdart contributes to many LGBTI equality initiatives within the United Nations including the Free and Equal Campaign, a global awareness campaign on homophobia and transphobia. It is the second most successful United Nations campaign after UN Women.

Another initiative is the UN Standards of Conduct for Business on tackling discrimination against LGBTI people which has received the support of 175 of the World’s largest corporations since it was first launched in September 2017.

“I spent a lot of the past eight months spreading awareness on the Standards of Conduct for Business, which I co-authored with the Institute on Business and Human Rights. The idea behind it is that a lot of companies in the world, particularly outside of the UK, the United States, and the most progressive countries in Europe, continue to see LGBTI issues as an issue of corporate culture or an issue of tradition rather than an issue of human rights. We wanted to remind these companies that it is a human rights issue, as legitimate as other human rights issues they understand such as human trafficking or child labor, and that they do have responsibilities. Then we also wanted to send a message that the private sector has tremendous opportunities to contribute to social change whether it is through marketing, collective action of soft diplomacy,” Houdart said. “Of course, one example that comes to mind is the way the coalition of business has been pushing back against the bathroom law that targeted transgender people in the North Carolina. And also in 2012, there was a movement by private businesses to push back again the infamous “kill the gays” bill in Uganda”

Houdart has also witnessed companies through different platforms of marketing express support for the decriminalization of homosexuality in India and a coalition companies supporting Pink Dot, an equivalent of the Gay Pride in Singapore.

“This idea that not only do companies have a responsibility ensuring that they do not discriminate against LGBTI people in the workplace, they provide their staff with the opportunity to work with dignity and ensuring their supply chain abide by these standards. But they also have a lot of opportunities to contribute to social change, and whenever possible, they should grab this opportunity. This document is also a call to action.”

Despite efforts and pressure to be more open-minded, not all client-facing companies accept this notion.
“In the United States there are an increasing number of companies that have very strong diversity and inclusion policies and have taken the opportunity to look that the entire supply chain is respectful of the human rights of LGBTI people. But it’s not all companies in all industries. As an example, the extractive or the automotive industries have not been at the forefront on this issue. Strangely enough, a lot of companies in the luxury industry have also been pretty shy about expressing support for human rights of LGBTI people, too. Companies that are client-facing, or competing for talent have felt more pressure from their stakeholders. The reality is that if you looks at Gen-Z there is ample evidence that as customers, investors or employees they will ultimately only engage with companies which values align with theirs. It’s not a question of if, it’s a question of when.”

Houdart said he speaks to two companies every day and has seen the momentum of companies wanting to express support for the Standards accelerate.
“We are at a global tipping point on this specific issues and the private sector feels it. In my opinion, there is an urgency to global social change because it is not sustainable to have parts of the world in which LGBTI people start to be able to have fulfilling lives where their family is respected, where they can be themselves at work, where they do not experience violence in the streets, then, to have another part of the world in which most LGBTI people live in the shadow.” Houdart said. “That’s not sustainable, because they will be able to live a life of opportunity and dignity and they will be able to live their sexual orientation or their gender identity, and it’s a huge despair to know that the only thing that stands between you and your life is a plane ticket. In my opinion, we need a social change and we need faster social change. We do not have 50 years, which is the time between Stonewall and the shift in public attitude we saw in the United States. Therefore, we need to explore all avenues to first have the social change, and I think the private sector will be remembered has having made the scale tip on this issue.”

To learn more about the Standards:
http://unfe.org/standards