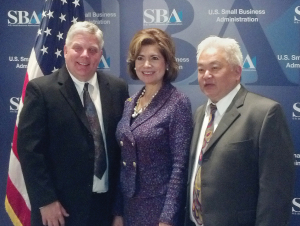 Against many odds, Jusak Bernhard and Jeff Manley have a successful business. Leaving behind award-winning careers in the entertainment industry and their home in Los Angeles, they moved to Savannah, Ga., where they opened TailsSpin Pet Food & Accessories. On the first day of business, the store tallied a single sale of 89 cents. Now in its seventh year, it employs 26 people and has three locations, one of which sparked the renaissance of a once-derelict strip shopping center.

This isn’t just a story about succeeding in the face of great personal and economic risk, however. Bernhard and Manley have used their success as a springboard to give back to their community and inspire other entrepreneurs.

Before launching TailsSpin, the intrepid pair realized their trek through new territory — both geographically and existentially — would be a bit easier with a little help. They approached The University of Georgia Small Business Development Center in Savannah for assistance with developing a business plan and accessing funding. Through SBDC, the duo learned about GrowSmart™, a program of the U.S. Small Business Administration that provides tools and strategies to assist startups and established small businesses grow and excel.

Bernhard and Manley leveraged the assistance to quickly and strategically develop their business. After hearing about their progress and meeting them, Mark Gibson, public information specialist for the SBA Georgia District Office, invited them to serve as panelists for the Many Faces One Dream initiative when it visited Atlanta in 2013. MFOD is an economic empowerment tool designed to help LGBT businesses in communities of color. Bernhard and Manley discussed strategies for building capacity without placing too much stress on operations.

The entrepreneurs decided to take their involvement with MFOD a step further and assist with planning a stop on the program’s tour for Savannah early next year.

“Savannah is gay-friendly,” Manley said. “We have many LGBT businesses here, but there could be a stronger presence. We think MFOD can address LGBT challenges, fears and experiences.”

Earlier this year, Bernhard and Manley were named Small Business Persons of the Year by the SBA Georgia District Office. The award recognizes achievement, spirit and commitment to the state’s small business community.

It was a triumph for the two, who turned a new-found passion into a mission.

Before the couple moved to the East Coast, they had steady careers in the entertainment industry in Los Angeles. Manley won a Peabody Award for his editing work, and Bernhard won an award from the Coalition of Asian Pacifics in Entertainment. Nonetheless, they desired something different for their future.

“It was in 2006 and Jeff said ‘Let’s go to Savannah,’” Bernhard recalled. Once there, any questions they had about the area were assuaged by its charm and proximity to the ocean — a trait they liked about L.A. “We wanted to get away from the entertainment business, and we needed to make a clean break,” he said.

They sold their West Coast home and headed for Savannah, but weren’t sure what they would do once they got there. After passing on the initial idea of opening a restaurant, they looked in their own home for inspiration.

Their dog had allergies and was on a steady regiment of steroids. “After six months, the allergies were gone, but the dog had gained weight and was lethargic,” Bernhard said. They were advised to provide a more holistic diet for their pet and, in the process of doing so, found their calling.

“We discovered that we were passionate about getting our dog healthy,” Manley explained. “We knew how people felt about their pets and we wanted to help them too.”

Total sales for TailsSpin’s first day in March of 2007 was 89 cents, spent on a can of soda.

“It was scary,” Bernhard recalled. “All the money we made from selling our house in L.A. was at stake, and we had taken out a microloan.”

Their fortunes soon turned, however, when the U.S. Food and Drug Administration issued a recall of many brands of pet food that were found to contain melamine, a chemical potentially deadly to pets. Looking for healthy alternatives, customers found that TailsSpin carried a variety of holistic, hypoallergenic and organic products, and the retailer became a top destination for pet owners in the Savannah area. Only 18 months after the store opened, Bernhard and Manley relocated TailsSpin to a larger facility in a desolate shopping center in midtown Savannah.

Thanks in part to the store’s sponsorship of pet-related events, such as adoption fairs, low-cost vaccine clinics, pet parades and the Woof! Woof! 5K Run/Walk Over Pet Cancer — and the crowds attracted by these events — the shopping center has signed several new tenants.

Supporting the community has been a satisfying byproduct of TailsSpin’s success for Bernhard and Manley.

“It’s important to give back,” Manley said. “We’ve developed partnerships with many groups and individuals, and we’re very grateful to this community for helping TailsSpin become what it is today.”

Much of that success has a foundation in the two entrepreneurs’ knowledge of themselves.

“It’s important to understand your strengths and talent,” Bernhard added. “A lot of the skills and lessons we learned in our past careers we put to good use with TailsSpin. You just have to find your passion and be willing to take risks.”