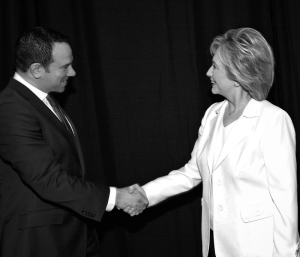 Born in Israel, Kutscher moved to Long Island, New York as a kid but his trans-Atlantic travels didn’t stop there.

“I’m kind of a nomad so the fact that I’ve lived in D.C. for 13 years is a miracle,” Kutscher said. “I was in New York for 4 years, then went to college in Davidson, North Carolina. I was an anthropology major and Spanish minor there, and was fortunate to have many opportunities, such as working in Mexico on an archaeological project with my professor, and spending a semester in Spain.”

After college and before the Internet became ubiquitous, call centers were at the heart of customer service. “The company that recruited me needed people to help install and service call center management software across Latin America and they were looking for people who spoke Spanish. Along with several of my classmates, I had the chance to combine work and travel in Mexico, South America, Europe and even South Africa.

“I did that for a couple of years and then I moved to Seattle to work for a large bank doing what else? Call center management” Kutscher said.

Eventually, DeVere was dispatched to Costa Rica for several months to help establish the bank’s outsourced bilingual operations, effectively working himself out of a job. That’s when he decided to get this MBA in Arizona, where he met his partner Duane. After DeVere finished his studies and Duane completed his law clerkship, they moved to Washington D.C., where they would eventually settle down.

“When we got to D.C., it took me a while to re-establish my career, but then I got this great opportunity,” Kutscher said.

In 2009, Kutscher was approached by Javier Palomarez, then the new President & CEO of the USHCC to come on board as part of a revitalization of the association.

“I had no idea what this organization was, but I knew Javier, and told him I loved a challenge and would join him in this venture,” Kutscher said. He was named vice president of Marketing and Communications, and eventually Senior VP of Strategy and Chief of Staff.

“DeVere has been an integral part of the USHCC leadership team, serving in strategic roles as an executive since 2009. We are fortunate to have him now in our USHCC Foundation, where he is applying his leadership experience to a dynamic part of the organization. The Board of Directors for the Foundation has coalesced over the past year, ensuring the Foundation is primed for growth,” Palomarez said.

“DeVere works tirelessly to strengthen our current partnerships, including those with the LGBT, African American and Asian American business communities, and build new relationships, raising the profile of the Foundation,” Vaca said. “In his new role, he oversees an exciting new phase of critical growth, while we continue to offer programs focused on women entrepreneurs and executives, local chamber leadership, college students and scholarships.”

Marriage and a Baby Carriage 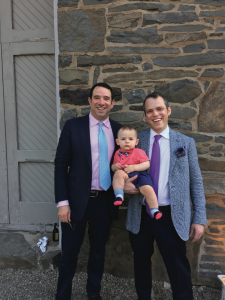 In 2010, after marriage equality passed in the District of Columbia, DeVere and Duane were married at the DC courthouse, and later celebrated with friends and family at their reception in Texas. Our wedding announcement was in the New York Times. I thought: well, there’s no better way to come out, than that!”

“With the Supreme Court’s decision on marriage equality in 2015, it was a very emotional moment seeing that our marriage would now be recognized nationwide” Kutscher said. “Looking back, I never thought I’d reach this moment where I would be celebrating my marriage with my husband publicly, much less see marriage equality become a reality.” At the time, the couple was expecting a baby via surrogate. It is only fitting that the day marriage equality passed, they were en-route to Rhode Island to see the ultrasound image of their son.

“I thought: Wow…our son will be born in a country where marriage equality is the law of the land. That was very powerful. He won’t know a reality that is any different,” Kutscher said. “We don’t have to worry now, if we move with our son from D.C. to Virginia or from Maryland to Texas without concern for those particular protections. It was a very liberating moment.”

“One of the things I really appreciated working at the USHCC with Javier and Nina, is how open and accepting that environment has been, and how they lead by example. They have made me and my husband feel welcome, supported, and loved. The chamber even gave me three months of paid paternity leave when my son was born. They lead by example and stood by their ideals with actions.”

Unfortunately, since that shining moment in 2015, we have seen that there is still so much left to accomplish.

“Work place protections are still not nearly strong enough. You could get married on Sunday and be fired from your job on Monday and lose your housing on Tuesday – just for being gay. Protections for Trans members of our community are even further from adequate. Marriage equality is a great beginning, but especially in the current climate, all the hard-won gains of our community must be vigilantly defended.” Kutscher said.

From the BizVenture Entrepreneurship Training to the At the Table initiative, the USHCC Foundation focuses on equipping entrepreneurs and executives with the skills and resources needed to lead thriving businesses and organizations, create American jobs, enrich local communities and reach their full potential.

The USHCC Foundation continues to grow and develop relationships with over 200 local chambers and business organizations around the country – the lifeblood of its national network. Through the Chamber Training Institute, presented by Wells Fargo and delivered by the University of Notre Dame, over 1,400 chamber leaders have graduated from a free, world-class learning experience, custom-developed to elevate their business and managerial skills and prepare them to succeed in a wide range of arenas.

Also, in partnership with Wells Fargo, the USHCC Foundation provides funding each year directly to local chambers across the country for programs that strengthen and foster the growth of their small business communities. In addition to its programs, the USHCC Foundation offers multiple scholarships that support small business leaders, young entrepreneurs, and those pursuing careers in business and STEM.

Founded in 1979, the USHCC actively promotes the economic growth and development of our nation’s entrepreneurs. The USHCC advocates on behalf of nearly 4.2 million Hispanic-owned businesses that together contribute in excess of $668 billion to the American economy, each year. As the leading organization of its kind, the USHCC serves as an umbrella to more than 200 local chambers and business associations across the nation, and partners with more than 250 major corporations. For more information, visit www.ushcc.com.

ABOUT THE USHCC FOUNDATION

The mission of the USHCC Foundation is to enrich the experiences of future leaders in the world of business through life-long learning and support. The Foundation’s initiatives awaken and nurture the entrepreneurial spirit, support business growth, strengthen local chambers and foster leaders. Please visit www.ushccfoundation.org for more information on the USHCC Foundation.