Connecting the World with a Red Thread
By Brenda Matamoros-Beveridge 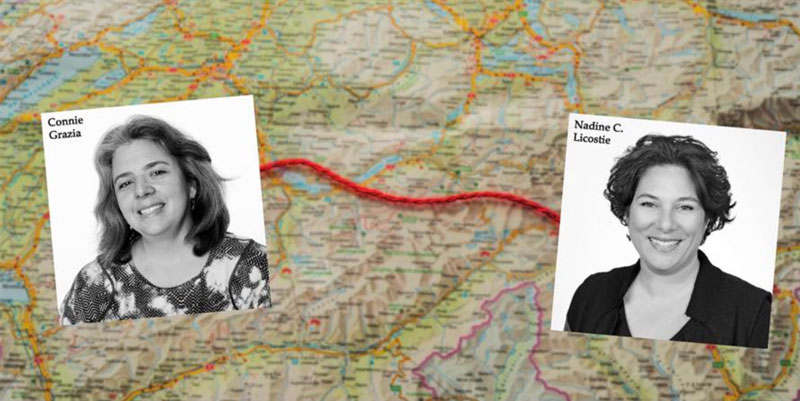 Connie Grazia and Nadine Licostie had known of each other for many years. Not from growing up in Queens, New York but through the industry. Licostie worked with Grazia’s brother for three years in the film industry and he made it his mission to introduce the two women. That fateful meeting took place in the middle of Times Square at 4 o’clock in the morning in 1999.
“When we did meet, we certainly hit it off. We realized we had a lot of the same principles and ideas about how to engage the world and engage creatively in that industry,” said Licostie, executive producer, director and principal. “We both have a great love for what we do and a great passion. We literally sat down one day in the VegCity Diner on 14th Street and looked through all the lists of the people that we knew and the path of prospects we may have in terms of driving our own work, and we started a company.”

WEAVING IT TOGETHER
After 18 years, the evolution of their collective idea is now an agency of ‘award-winners, quality zealots, brand whispers, creative directors, movie directors, quantitative focusers, technology jockeys, story boarders and story builders, copywriters and screen writers, MBAs and PAs, word editors and film editors’
Their studio is equipped with the most cutting-edge, collaborative post-production software and equipment available. Utilizing the tenets of the recently launched Avid Everywhere MediaCentral Platform, the company can quickly and securely provide the best quality products and services for any media production. From live events to television and film, their post services provide real-time collaboration across the globe.
Grazia, a principal of Red Thread, is an award winning producer and director and has worked on for-profit and nonprofit projects including live events, commercials, corporate videos and documentaries.
With her passion for theater, film, television, and new media, Licostie, principal at Red Thread, has directed projects with some of the top talent across these diverse media. As an executive producer, Licostie has led teams of writers, graphic designers, editors and multimedia programmers creating award winning national television commercials, promotions, interactive media, and corporate events.
Together their work has been recognized with numerous industry awards including several Telly Awards and a gold Effie.
Red Thread’s clients include Bank of America CBS, HISTORY, Hewlett Packard Enterprise, SAP, HP, MTVNetworks, AVON, GLAAD, Vital Voices, The Trevor Project, True Colors Fund, Anti-Violence Project, Children’s Museum of Manhattan, AstraZeneca, Bloomin Brands and New York Downtown Hospital.

THE THEADERS
Red Thread is an Asian proverb that says when you’re born into this world you’re connected by an invisible red thread to everyone you’re destined to meet.” Grazia said. “We’ve even got a shorthand now when somebody has worked with us or been a client, they’re considered a Threader. Part of the work we do is broadcast and entertainment and part of the work we do is directly for corporate clients. It’s a real challenge and it allows us to live in both worlds. Now with digital media being such an important part of everyone’s media plans we feel that we’re positioned well for many audiences.”
Red Thread has done a lot of work in producing live shows and producing digital events has been a big part of their business in the last 10 years.
“Because we have that experience, when we’re producing a live event we understand how important it is to not only shoot it and produce it for the live audience but also for the digital audience who is going to experience either live streaming or on-demand. We feel like we’re uniquely positioned for that,” Grazia said.
One of their earliest clients was CBS and both agreed it changed them professionally by giving them the challenge of a high stakes event. But their pro bono work with GLAAD (the Gay & Lesbian Alliance Against Defamation) was less about financial gain and more about working on projects that were really, really meaningful to them.
“Being able to say yes to a project with GLAAD knowing that it wasn’t going to make us as much money as say another project, but being able to say yes to that anyway led us do the GLAAD MEDIA Awards for several years and that led to a really big project with SAP which was one of our sort of big watershed years where we did a global broadcast for them. The client came through a personal relationship of Connie’s but the work we had done on the CBS Upfront and the GLAAD Media Awards were things that they could look at to see our full capabilities.”
Licostie added, “Like I said, maybe one was more lucrative than the other but they were built out of the same, cut from the same cloth in the sense that they were projects that we were really, really passionate about and they led us to an incredible opportunity with SAP.”
The same can be said about the History Channel which included a branded content project for the series America, The Story of Us. The project stretched them creatively and financially as it wasn’t a big budget project. It did help them develop a relationship with Bank of America and that relationship changed their trajectory. Now, Bank of America is one of their clients and certainly has given them a lot of reward, both creatively and financially.
“We’ve seen the proof about the choices that you make. When you make good choices they lead to much better outcomes. I think that’s testament to that, making those decisions,” Licostie said. “It’s doing things the right way; not cutting corners; being respectful of others; engaging with our clients and our collaborators; in a way that’s really human. Doing it on that level has really given us so much to be grateful for and we’ve been able to survive all these years, despite the many ups and downs that come from being in business.”

LGBTQ THREAD
As a certified LGTBQ business, Red Thread is the perfect example of why LGBTQ entrepreneurs should become certified.
“I think it’s vital to be certified, especially today, so that you’re counted as an LGBT for the companies that are giving you the business so that they can count that work that they’re giving you as part of their supplier diversity numbers,” Grazia said. “We were working with CBS and Bank of America and some other folks before we had the certification then once we got the certification and made them aware of it they … it was very important to them. I think it’s vital in today’s market. I think it’s also a differentiator for the companies because they are looking for that certification and it means something to the big Fortune 500 companies. It is also important for you as a company to have that certification but when you’re in the position to hire other companies, first, second tier, third tier work, to look for that as well.”