Brian Kelly: Opening Up the World, One Traveler at a Time
By Jennifer Mills 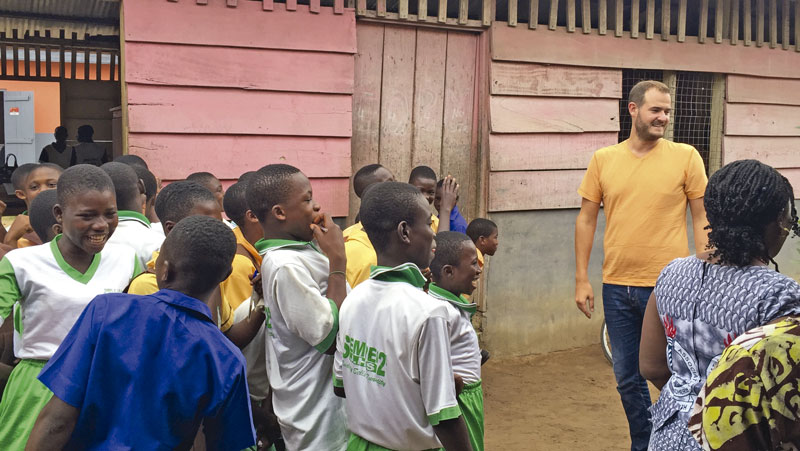 Brian Kelly has a bit of advice for everyone: Travel and travel often.
The founder and CEO of The Points Guy (TPG), a go-to site for travel lifestyle tips, thinks that not only does it open up your world, it changes you.
While his early career in finance led him to Wall Street and Morgan Stanley, it was studying abroad in Spain during college that gave him the travel bug and the points perspective on how to make travel attainable. Kelly suddenly found himself with elite status on airlines and more points than he knew what to do with.
“After Spain, I went on spring break to Dublin with my friends and loved it,” Kelly said. “I realized there’s such a big world out here and I’m not done exploring. I learned how to use points and find great deals. Of course it wouldn’t be until years later when I created a business around that, but that’s when my enlightenment around travel and loyalty programs was really cemented.”
Founding The Points Guy initially as a blog while working for Morgan Stanley in 2010, Kelly has become a distinguished voice in the industry of points, miles and all things travel-related and was voted Forbes’ No. 1 travel influencer in 2017. His single blog has grown into an extensive travel and lifestyle platform with writers and editors curating editorial content that includes news, travel advice and tips, flight and hotel reviews, and immersive videos of the locations where Kelly travels himself. With 6 million unique monthly visitors and more than 2.2 million social media followers, he said it’s just as important to be authentic as it is to provide travel advice.

Personal Connection
“You succeed in life when you are authentic. People want to know who you are, they want to know you,” he said. “In the beginning of my business, I didn’t know if I should say that I’m gay. But in the end, when I did tell my readers, it didn’t matter. People were supportive and like ‘great, now can I ask you about my travel points?’ ”
Kelly added that he still struggles with how much to share on social media. But he knows people would like a glimpse into his life. “The more you can build a true connection with your fans the more your business will take off. And mine has skyrocketed.”
That relationship building makes Kelly’s offering all the more beneficial because he can help readers with the very thing they’re looking to find on his site. “People come to The Points Guy to learn how to use their points and their miles so they can take amazing trips with their families—so they can save money and travel better.”

Finding His Voice
With a little help from his own father’s travel points when Kelly was a child, he and his three siblings were able to travel with their parents every summer to New York City’s Time’s Square over the July 4th holiday to see the city’s shows. That nurtured Kelly’s desire to one day move to New York.
“I knew this was the life for me because this is where it all happens,” he said. “Deep down I knew I was gay, and I knew New York City was the most accepting place to be.”
After college in Pittsburg, he did just that. Moving to New York, he started working as a buyer for Lord & Taylor on Fifth Ave, the oldest department store in the United States. “I thought now is the time,” Kelly said. “I had a great experience at Lord & Taylor and my family has been amazing and great about my coming out.” While the retail and fashion industry is LGBTQ-friendly, he found an even greater support system on Wall Street and at Morgan Stanley, which had its own LGBTQ affinity group.
It was at this time that Kelly realized, beyond his personal interest in travel, he had a knack for finding great deals and for simplifying the travel point system for friends and family. He was hungry for a new challenge and wanted to help people. With that first blog post came the platform to help travelers and eventually to help humanity through philanthropic giving.

Greater Good
One of his current focuses is Rainbow Railroad, an organization that helps to bring persecuted LGBTQ to safety, similar to what the Underground Railroad did for slaves during the U.S. Civil War. Safe houses are available all over the world, and The Points Guy as well as other supporters of the organization donate frequent flyer miles to fly those individuals to places where they can find asylum. As an ambassador, Kelly recently helped raise $200,000 to provide support for the organization.
“It’s still illegal in 70 countries to be gay,” he added. “Those people would not be able to get out without the support of this big donor network.”
That personal connection to the reality of so many LGBTQ throughout the world, is what keeps Kelly attentive to the work of the Rainbow Railroad.
“I work with people from Jamaica who will never be able to go back to Jamaica because they will be killed. In Chechnya there are concentration camps where the government has said they are going to round up all of the gay people so they can eradicate them,” Kelly said. “But I’ve never met a single person—even those who are persecuted or in the direst circumstances—who says, ‘I wish I wouldn’t have come out.’
A way, he sees, to change this view in many countries throughout the world for the entire LGBTQ population is to start with current travelers.
“The way that we make change around the world is to travel more,” Kelly said. “The more people meet gay people, the more they realize they are not their enemy. Those person-to-person interactions are where progress happens. Still explore the culture. It will change you as a person, and chances are it will change someone else too.”