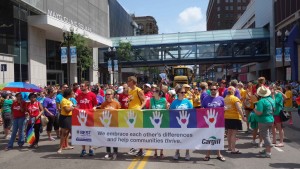 Team Cargill made a strong showing earlier this summer at the Twin Cities Pride Parade in Minneapolis and did not go unnoticed. “You know you’re in the Midwest when Cargill employees march with farm equipment,” joked one Twitter user, apparently impressed with the massive fertilizer spreader that followed the company’s delegation.

The Minneapolis Pride Parade is the fourth largest in the United States, behind New York City, San Francisco and Chicago. In light of the Supreme Court’s decision to legalize same-sex marriage in all 50 states, the event was even more festive than usual.

“I was just incredibly proud as a gay woman at Cargill to look around and feel the support we got,” said one of the company’s executives. “Things have definitely evolved and changed at Cargill. I have been here for 16 years and there has been a real shift.  It makes me proud to be part of an organization that is so inclusive and becoming more and more matter of fact about it.”