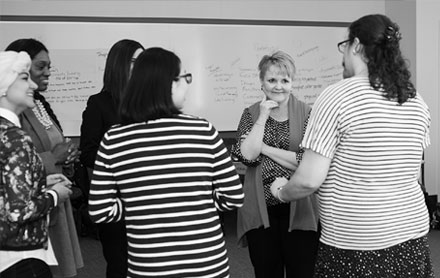 Barbara Clarke has always been involved with startups in varying capacities. At present, she is a nationally-recognized investor in early-stage technology companies and she is a member of Astia, an international network of professionals committed to supporting women-led, high-growth entrepreneurial ventures. She is a founding member of Astia Angels, an angel group investing in startups and on the investment committees of a venture fund through Portfolia.

“I like the fast-paced nature and the pursuit of innovation. I like creating new companies and starting things from scratch. I’ve also worked at long-established companies and know that making change or being innovative in those environments is unnecessarily challenging,” Clarke said.

“The numbers are even worse for black or Latino men and women of color. For me, these numbers show that the system is broken. The way we support innovation in our economy is broken. I fundamentally believe that diverse voices lead to better innovations,” Clarke said. “I don’t want to hang out with or work with people who are just like me. The more thoughtful answer is that the data show that diverse teams are more successful than monoculture teams. In the past year or so, diversity in many circles has come to mean gender only. It is important to me that diversity does not mean just adding a cisgender, straight white woman to a team of cisgender, straight, white men.”

She connected with StartOut to identify more women-led companies, and that led to her volunteering to be a mentor in its Lesbian Entrepreneur Program. At the time she didn’t realize she was the first straight woman to take part in the program.

“My connection with the StartOut program has led me to think even more about networks. My involvement with StartOut is on my LinkedIn profile and that has led to many LGBT people reaching out to me,” Clarke. “I know that many of my LGBT colleagues are not comfortable having their sexual orientation included in their professional profiles, and that is a challenge for them when networking. I know that the lesbian community is strong and supportive, but it can be a challenge for women to connect if they don’t know who is in the network.

“This time around I decided to be an investor. It allows me to work with a range of companies and markets. That’s what I really like, looking at innovation across borders and across markets. As an investor, I have a portfolio of companies, and that mix of industries, markets and people keeps me engaged. As an investor, I often advise my investees on any number of issues. My background is in intellectual property, so I have always been interested in examining what creates value for a company,” Clarke said.

She is also a recognized voice for advocating inclusive innovation and is one of the founding principals of newly-formed The Impact Seat, a platform for inclusive innovation. Each company in her portfolio has at least one woman in a leadership role and over a quarter have people of color in a leadership role. She has been a management consultant specializing in intellectual property, a social entrepreneur who launched Cradles to Crayons, and she has served on many nonprofit boards. Barbara has a BA in Quantitative Economics from Tufts University where she recently served as president of the alumni association and received its Distinguished Service Award. She holds an MA in International Economics and Finance from Brandeis University.