The National LGBT Chamber of Commerce (NGLCC), the business voice of the LGBT community celebrated members of the LGBT and allied business community during the 2018 NGLCC Awards Gala Dinner, held in Washington, D.C. on Friday, November 16. IBM and Aetna served as presenting sponsors of the gala, hosted at the National Building Museum.

The 2018 Awards Gala brought together hundreds of LGBT business owners, corporate diversity leaders, elected officials, and representatives from NGLCC Global international affiliates from around the world for an evening of celebration. The gala also marked the culmination of the third annual NGLCC Global LGBTI Business Week, sponsored by Accenture — a summit focused on global LGBTI economic development and human rights through promoting LGBTI business empowerment and inclusion.

“The resiliency of the LGBT business community was on display at our 2018 Awards Gala, as we honored those who elevated our voices, accelerated the growth of our businesses, and championed our inclusion at every level of business and social success,” said NGLCC Co-Founder & President Justin Nelson “2018 was a year of tremendous growth for the NGLCC. With over 1200 certified LGBT Business Enterprises, more than 200 corporate partners, and new inclusive contracting laws now in place and in development across the nation, we are poised for an even more impressive expansion of our work worldwide in 2019.”

House Democrartic Leader Nancy Pelosi was a surprised guest at the Gala, reaffirming her support to the LGBT community. “We are proud that so many new LGBTQ members…represent every corner of our country,” she added. “LGBTQ members look like America: They’re mothers, business owners, people of color and members of the native nations.” Pelosi spoke hours after Justin Nelson and Chance Mitchell — co-founders of NGLCC — and more than 100 other leading LGBT advovates endorsed her for speaker.

Corporation of the Year | Bank of America
2018 marks the 28th year that Bank of America has had a formal corporate supplier diversity program, and in that time, they have spent more than twenty billion dollars with diverse businesses. From leadership roles on NGLCC councils, to mentoring dozens of suppliers, to opening their doors across the country for LGBTBE education programs with NGLCC affiliates, Bank of America has been a visible, steadfast leader in supporting the LGBT business community.
Supplier Diversity Advocate of the Year | Todd Rice, American Airlines
Todd Rice is a champion for LGBTBEs, serving on the Certification Committee and representing American Airlines at countless NGLCC council meetings and special events. Todd has coached nearly a dozen LGBTBEs in the NGLCC Mentorship program, galvanized local leaders to work closely with our affiliates, and helped push the entire airline industry forward toward greater LGBT inclusion.
LGBT Supplier of the Year | Heels & Hardhats
Heels and Hardhats Contracting Corp. was formed in 2010 when Jackie Richter, a general manager of a construction company, suddenly couldn’t find work following her transition. Jackie and her partner Cyndi formed Heels & Hardhats with a mission to train, promote and utilize greater diversity in the construction trades. They are a 100% woman-owned company that embodies inclusion at their very core and have become an essential pillar of NGLCC’s Construction & Related Industries Council.
NGLCC Affiliate Chamber of the Year | The Miami-Dade Gay & Lesbian Chamber of Commerce
The Miami-Dade Gay & Lesbian Chamber of Commerce is the among the largest LGBT chambers in the affiliate network, with nearly 700 members and a growing list of Miami’s largest LGBT-inclusive corporations. In 2019, the Miami-Dade chamber will be celebrating 20 years of serving their community and elevating the diverse businesses voices in their region.
NGLCC Global Advocate Award | Beth Brooke-Marciniak, EY
Beth Brooke-Marciniak is the Global Vice Chair of Public Policy for EY, and is the global sponsor for their diversity and inclusiveness efforts, serving more than 260,000 people in over 150 countries. Since coming out in a company-wide ‘It Gets Better’ video in 2011, Beth has leveraged her global platform to champion LGBT and women’s issues. Beth has been named to Forbes World’s 100 Most Powerful Women list ten times.
Additionally, NGLCC awarded the NGLCC/American Airlines ExtrAA Mile Award to the transgender community, represented onstage by trans business owners and Mara Keisling, Founder & Executive Director of the National Center for Transgender Equality (NCTE). NCTE was presented with a check for $25,000 as part of a new joint initiative with NGLCC to foster economic strength and entrepreneurship in the trans community.

“We thank all of our partners, our suppliers, our chamber leaders, and our allies for making 2018 such a strong year for NGLCC, and we look forward to expanding inclusive opportunities for LGBT businesses across the globe,” said NGLCC Co-Founder & CEO Chance Mitchell. “We look forward to welcoming the world’s LGBT business leaders to the 2019 NGLCC International Business & Leadership Conference next August in Tampa, Florida, and working all year to create the most inclusive, empowering economy for LGBT business owners.”

Check NGLCC’s Flickr page for photos from the 2018 National Dinner in the weeks ahead and view the 2018 In Review video debuted at the 2018 NGLCC Awards Gala below. 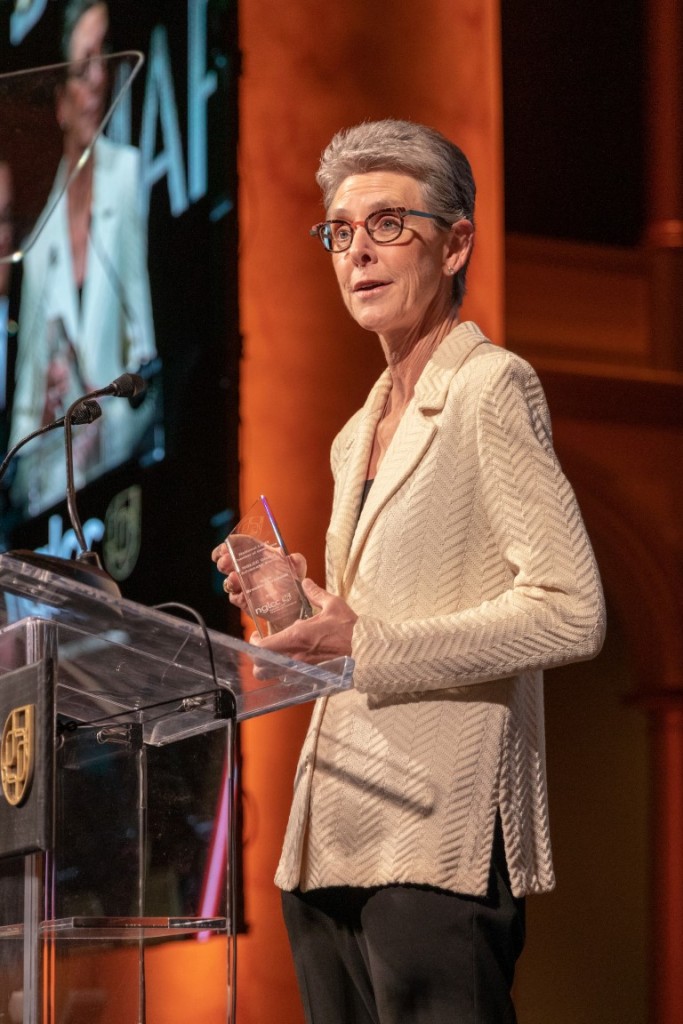 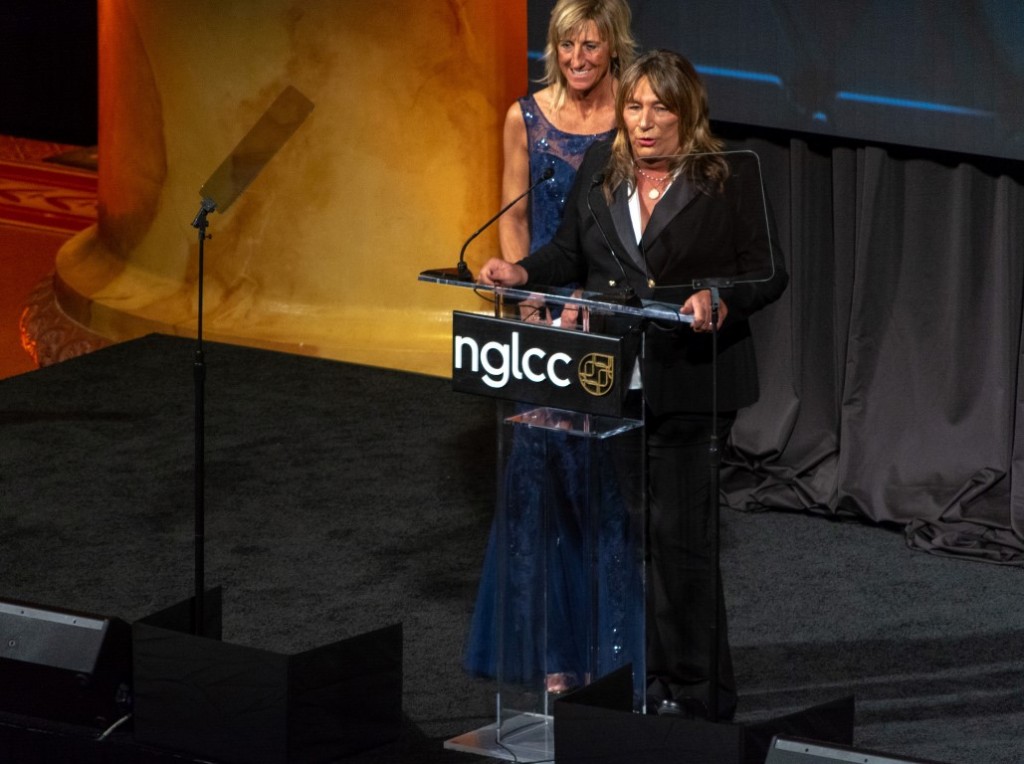 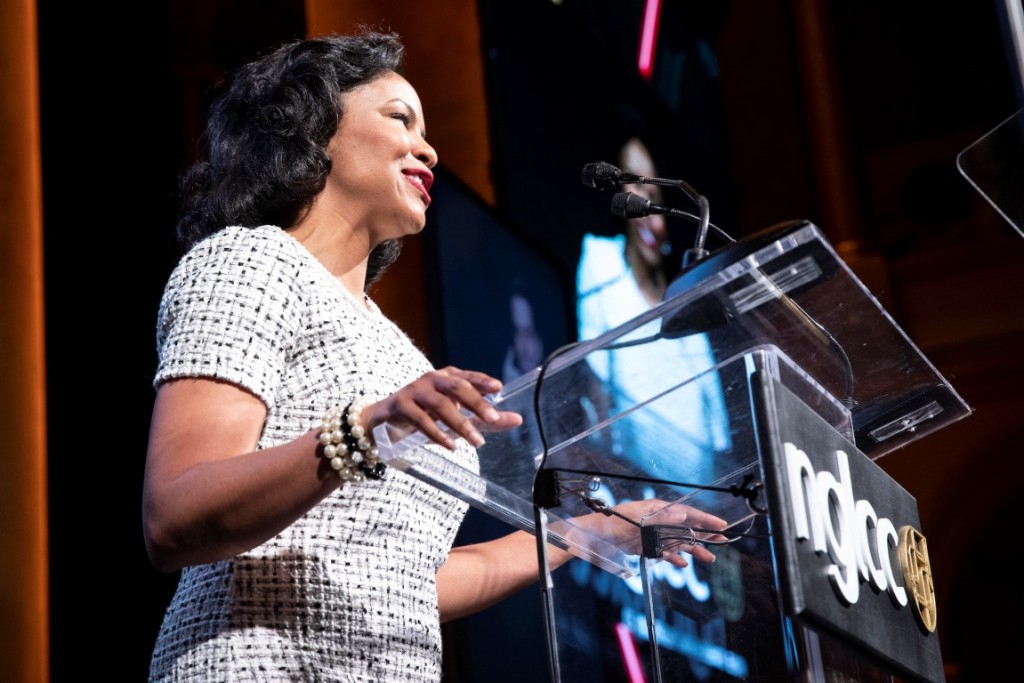 Bank of America (accepted by Vonshe M. Jenkins) –  2018 Corporation of the Year 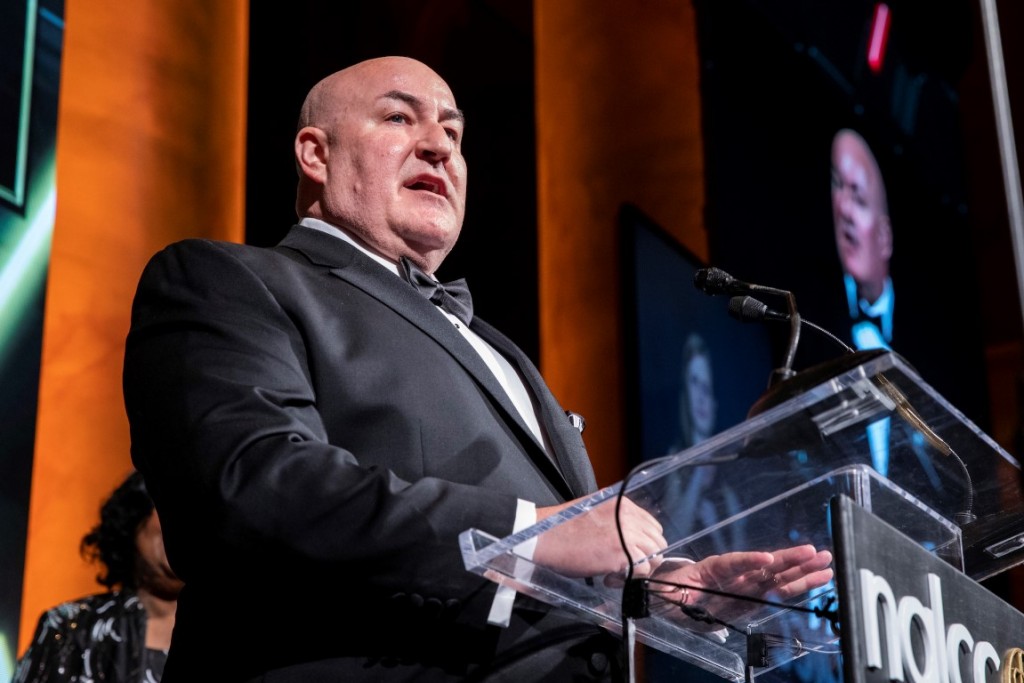 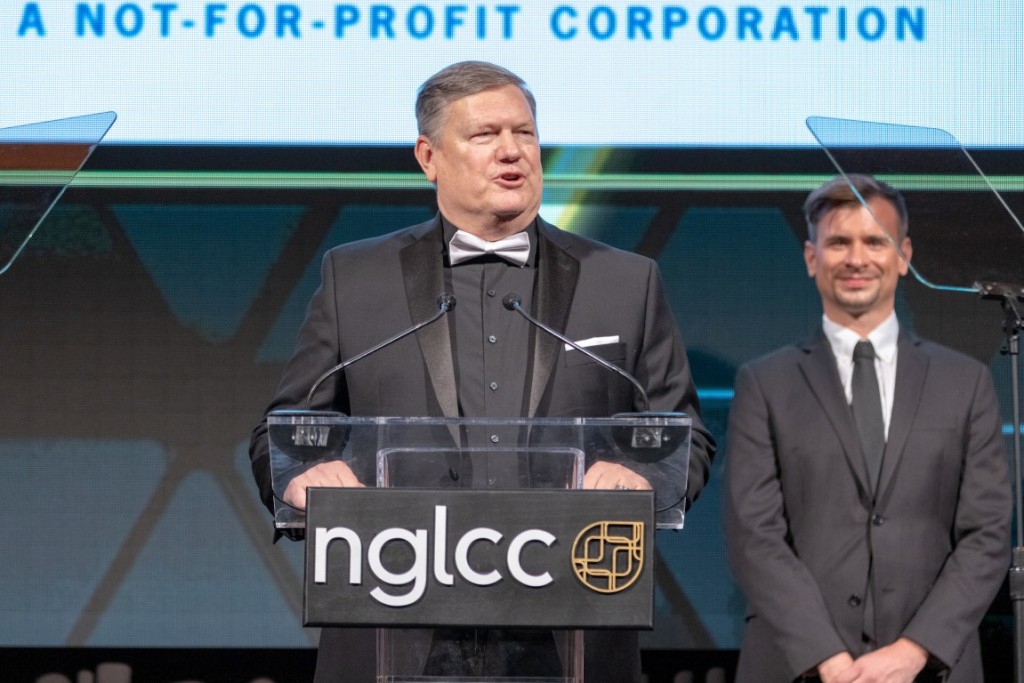 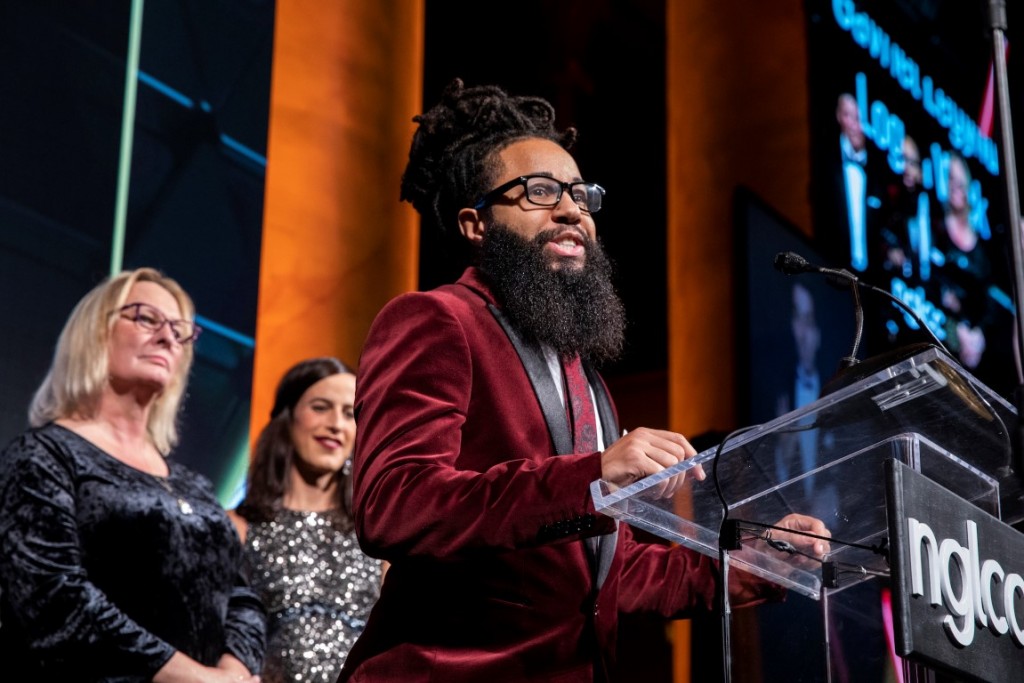 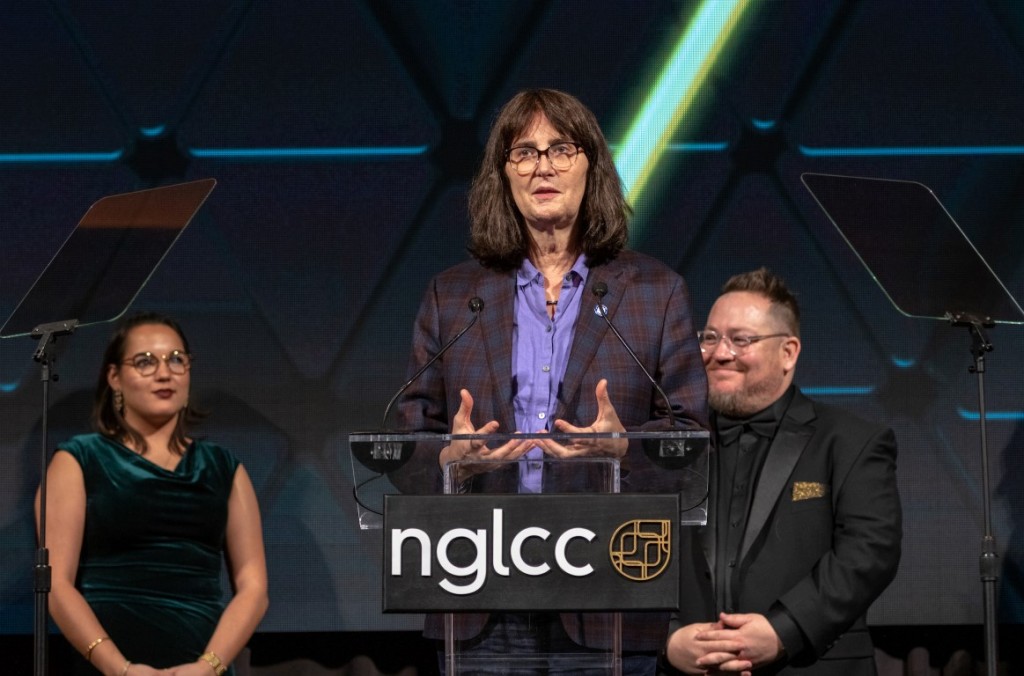 The award also included a $25,000 donation from NGLCC to the National Center for Transgender Equality, accepted by NCTE’s Founder and Executive Director Mara Keisling