United Nations pursues equality around the world and at home

As the United Nations appeals to all corners of the world to advance the human rights of lesbian, gay, bisexual and transgender individuals and renounce homophobia, the organization applies the same standard to its role as an employer by incorporating protections into its human resources policies to ensure the equal rights of its LGBT employees. Those protections include offering full benefits to employees in same-sex unions, regardless of whether the employees’ home countries recognize the unions as legal.

“Human rights are at the core of the mission of the United Nations,” Secretary-General Ban Ki-moon said. “I am proud to stand for greater equality for all staff, and I call on all members of our UN family to unite in rejecting homophobia as discrimination that can never be tolerated at our workplace.

“Equality begins at home, and I am all too aware that LGBT colleagues at the UN, and their families, continue to face challenges,” he said. “I heard many of their concerns firsthand when I met with LGBT staff. I pledged to address their problems. All staff members are part of the UN family and deserve to be treated equally.”

Jeffrey O’Malley, director of the Division of Data, Research and Policy at UNICEF, noted that the United Nations has been making progress both on emphasizing equality of LGBT people in advocacy and programs, as well as in responding to the diversity of its staff. He speaks from personal experience.

In the 1980s, he began working at the World Health Organization, the UN’s public health arm. O’Malley was one of the first openly LGBT professional staff members. Even now — three decades later — he is one of the few openly LGBT staffers at the director’s level in the UN system.

“Kofi Annan, the seventh Secretary-General of the United Nations, made serious efforts to achieve equality for LGBT staff, but he hit many obstacles put up by member states,” O’Malley explained. “I am very pleased that efforts at the very top have continued. Current UN Secretary-General Ban Ki-moon, together with former United Nations High Commissioner for Human Rights Navi Pillay, put pressure on members to recognize and defend the rights of LGBT people and supported in recent years a move towards greater respect for rights of LGBT people.”

There is more to be done, he added. “Our human resources policies have to undergo essential changes, and we have to make sure all our staff has the same kind of rights and benefits and all LGBT people have the same rights — along with their families — at the UN, as well as in its organizations, agencies, programs and offices,” O’Malley said. “I am an optimist, and I believe it will happen.”

Ban added that he is seeing progress in the private sector and cited the Human Rights Campaign’s Corporate Equality Index, which has noted an annual increase in the number of major companies ensuring equal benefits and rights for LGBT employees and suppliers.

“Several major companies have reformed internal policies and practices to ensure they do not discriminate against LGBT employees and are conducting sensitivity training for managers and other staff,” he said. “We need all business leaders to set an example by committing themselves and their companies to instill equality as a core value — one reflected in the way they do business and treat their employees.” 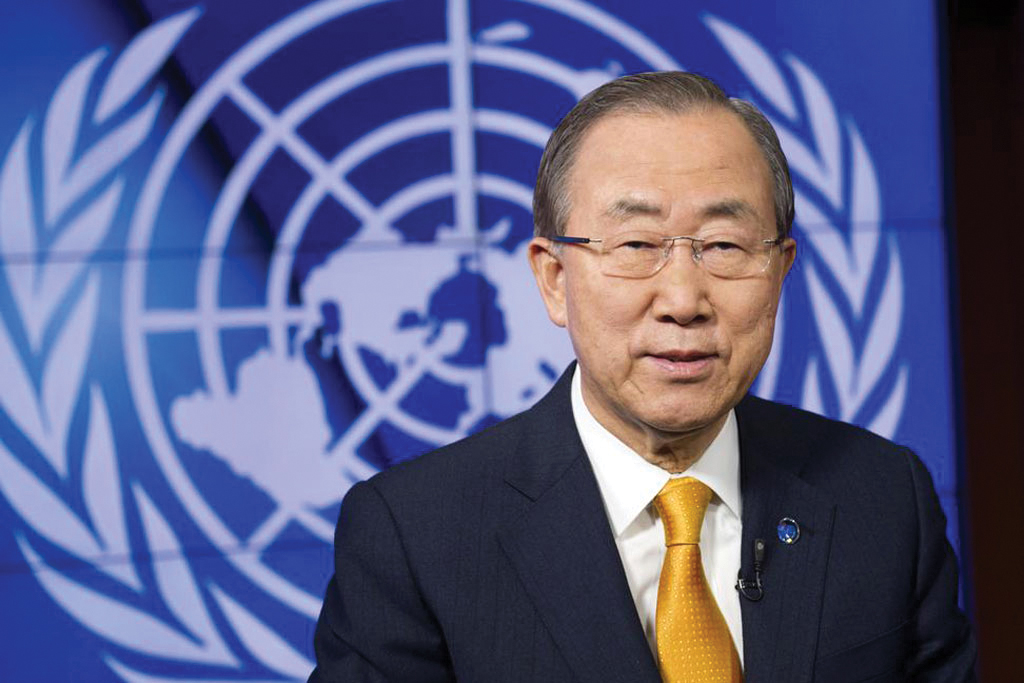 Breaking an unspoken taboo against discussing lesbian, gay, bisexual and transgender rights in the United Nations, a Dutch and French statement supported by the European Union is introduced to the UN General Assembly. The statement condemns aggression, harassment, discrimination, stigmatization and prejudice based on sexual orientation.

Secretary-General Ban Ki-moon calls for the decriminalization of homosexuality, an illegal act in several UN member states. “When individuals are attacked, abused or imprisoned because of their sexual orientation, we must speak out,” he says. “Where there is tension between cultural attitudes and universal human rights, universal human rights must come first. Personal disapproval — even society’s disapproval — is no excuse to arrest, detain, imprison, harass or torture anyone ever.”
June 2011

The UN Human Rights Office passes a resolution against human rights abuse based on sexual orientation and gender identity.

On Human Rights Day, Dec. 14, Ban says, Human rights abuse “is a moral outrage, a grave violation of human rights and a public health crisis.  It is a loss for the entire human family when promising lives are cut short. All states must take the necessary measures to protect people — all people — from violence and discrimination, including on [the] grounds of sexual orientation and gender identity.”

On Dec. 15, the UN releases a report on the murder and torture of LGBT individuals — as well as discrimination they face in health care, education and the workplace — as a result of sexual orientation or gender characteristics.

In a message to the Human Rights Council, Ban says, “Some say that sexual orientation and gender identity are sensitive issues. I understand. Like many of my generation, I did not grow up talking about these issues. But, I learned to speak out because lives are at stake, and because it is our duty under the United Nations Charter and the Universal Declaration of Human Rights to protect the rights of everyone, everywhere.”

UN High Commissioner for Human Rights Navi Pillay declares, “We cannot let [civil rights] abuses stand. Punish violence and hatred — not love. This is a historic moment; more and more [member] states recognize the need for action and are speaking up, including here at the United Nations.”

The UN Human Rights Office releases its booklet, “Born Free and Equal,” on sexual orientation and gender identity in international human rights law. The document is designed to help member states comprehend the nature of their obligations to protect the human rights of LGBT individuals.

In a speech to the International Day against Homophobia and Transphobia — or IDAHO — Forum in The Hague, Pillay acknowledges that some success in defeating homophobia has been achieved, but “many states are still reluctant to acknowledge the extent of violence and discrimination meted out to those who are lesbian, gay, bisexual, transgender and intersex.” She discusses the “alarming regularity” of hate crimes against LGBT individuals in all regions of the world, the criminalization of homosexuality and the lack of legal protections against discriminatory practices. These abuses “require immediate attention,” Pillay adds.

The UN Human Rights Office of the High Commissioner releases a two-minute video, “The Riddle,” to help raise awareness of LGBT challenges and to provide activists with an advocacy tool for use at events around the world.

The UN Human Rights Office of the High Commissioner launches “Free & Equal”, a global public education campaign for lesbian, bisexual, gay and transgender rights. The goal of the initiative is to engage people around the world in conversations that can help promote the fair treatment of LGBT people and generate support for measures to protect their rights.

The UN Human Rights Office adopts a resolution calling for an end to violence and discrimination based on sexual orientation and gender identity. “There is no justification ever, for the degrading, debasing or exploitation of other human beings on whatever basis — nationality, race, ethnicity, religion, gender, sexual orientation, disability, age or caste,” says Zeid Ra’ad Al Hussein, newly appointed UN High Commissioner for Human Rights.