Lockheed Martin Corp. has a long history of supporting lesbian, gay, bisexual and transgender inclusion. PRIDE, the company’s LGBT employee resource group, was founded in 1981 as an opportunity for LGBT and straight ally employees to seek ways to shape the future together. 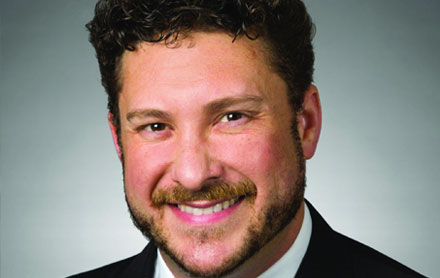 Freedman chairs the global PRIDE council and works closely with its members to support the community internally and externally.

Through its partnership with PFLAG, PRIDE members mentor youth and encourage them to pursue careers in science, technology, engineering and mathematics. The company also sponsors Out in STEM or oSTEM Inc., OUT for Work, transgender career fairs and Out to Innovate™, all of which help LGBT students transition to the workforce as proud out LGBT professionals.

“We reach out to our communities and march with our customers in pride parades across the country,” he said. “One of our PRIDE members recently spoke on a National Aeronautics and Space Administration panel at Kennedy Space Center, and U.S. Brig. Gen. Tammy Smith recently spoke at Lockheed Martin’s annual LGBT Leadership Forum.”

Support for PRIDE and LGBT inclusion comes from the top down, including Marillyn Hewson, chairman, president and CEO at Lockheed Martin, and the executive leaders of every business area in the company.

“Many STEM professionals carry painful memories of being bullied, not fitting in or feeling different as children,” Freedman said. “Accepting oneself as a nerd, geek or dweeb is in the family of accepting oneself as LGBT, a person of color, a person with a disability or any dimension of diversity. Working in STEM fields connects us through that shared experience, making it not just simple, but [also] logical to see past differences and straight through to the diversity of thoughts and ideas beneath. That’s where innovation lives.”

Freedman recounted that some of the most profound and effective pan-ERG events are during the Effective Leadership of Inclusive Teams readers’ theater sessions. During these gatherings, senior leaders from throughout the company read true stories from a diversity perspective other than their own.

“Hearing those deeply personal feelings voiced by a senior leader increases awareness and gives listeners the tools to better perceive and stand up to include different perspectives,” he said.

Mentoring is another aspect of the ERG that impacts employees directly. PRIDE offers emerging leaders their first opportunity to lead a major event, organizational function or business-unit sized ERG, providing them with the experience necessary to grow.

Christine Bland, an engineer working on human space flight as part of the NASA Orion spacecraft program, credits PRIDE with helping her succeed in both her professional and personal life.

She has been a critical part of the Orion program since joining in 2009, starting as a digital subject matter expert and overseeing all digital design aspects of the power and data unit, one of the most technically and programmatically complex efforts on the program. Recently, Bland took on a larger role as the point of contact and primary author of the complex electronics plan for the entire Orion program. She has received multiple achievement awards from NASA, and in 2014, she received the LGBT Engineer of the Year award from the National Organization of Gay and Lesbian Scientists and Technical Professionals.

“Having an active organization within a corporation such as the PRIDE ERG is invaluable because of its education and support resources,” Bland said. “Given the staggering number of people who are covering and hiding in corporate America, ERGs like PRIDE are imperative. From the transgender community perspective, the ERG provides a vehicle to reach out and get answers in a safe environment. Reaching out to the PRIDE group was the first thing I did in 1997 when I needed to begin my process to become my true and authentic self. Now, the ERG helps me to develop my leadership skills, network within the corporation and be an active participant in creating change and improving the diversity landscape for everyone.”

Three decades after it began, PRIDE membership has grown to number in the thousands, and the ERG continues to make a tremendous impact on people’s lives internally and externally through mentoring, outreach and education.